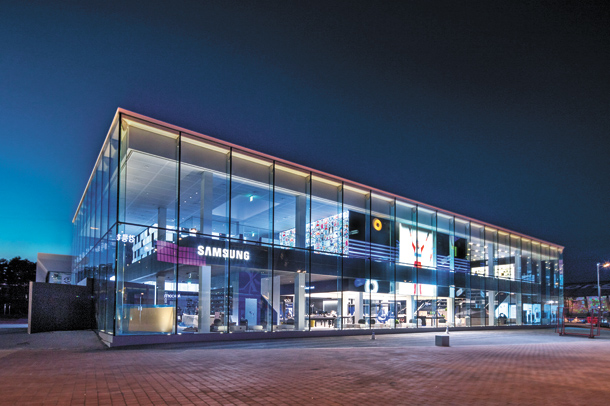 Samsung opened Samsung Olympic Showcases in nine places across the country on Feb. 9 to provide visitors the chance to try out breakthrough technology. [SAMSUNG]

Samsung first got involved with the Olympics at the Seoul Summer Games in 1988. Since the 1998 Nagano Winter Olympics, the company has remained committed to the Olympic Movement as a Worldwide Olympic Partner for Wireless Communications Equipment, providing its proprietary wireless communications platform and mobile devices. These innovative and distinguished technologies of Samsung have helped all Olympic athletes, fans and families around the world with interactive communications and information services. Samsung also hosted various Olympic activities to share and spread the excitement of the Olympics. Samsung wants to help everyone participate and enjoy the Olympics. Following the PyeongChang Winter Games, Samsung will continue its support during the 2020 Tokyo Olympics with wireless communication and computing equipment. 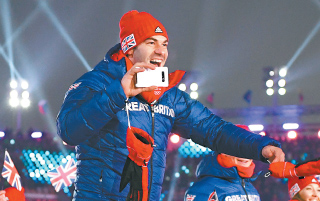 A British Olympian films the opening ceremony of the Olympics with an Olympic Games Limited Edition Galaxy Note8.

On Feb. 9, Olympians from 100 nations gathered in PyeongChang County, Gangwon, to celebrate the opening of the 2018 PyeongChang Winter Olympic Games. During the Opening Ceremony, athletes, fans and officials from all over the world enjoyed capturing and sharing the moments of the unforgettable Olympic experiences with the official Olympic phone, the Samsung PyeongChang 2018 Olympic Games Limited Edition.

Samsung Electronics unveiled the PyeongChang 2018 Olympic Games Limited Edition phone on Jan. 17. The company provided the special edition of the Galaxy Note8 in order to further extend its Olympic legacy of supporting athletes and the Olympic family. Samsung also wanted to provide encouragement to the hosts of the PyeongChang Winter Olympics, while also helping users maintain real-time connections as well as capture and share the memories with friends and families around the world. In collaboration with the International Olympic Committee (IOC) and the PyeongChang Organizing Committee of the 2018 Olympic & Paralympic Winter Games (Pocog), Samsung delivered over 4,000 devices to each Olympian as well as the PyeongChang 2018 Olympic families, including the officials of IOC and Pocog, with the expectation that they would be able to use Samsung’s mobile technology in order to enhance their experience and contact those near and far more conveniently. The PyeongChang 2018 Olympic Games Limited Edition included the bold new features of the Galaxy Note8, such as the innovative bezel-less 6.3-inch Infinity Display that fits comfortably in one hand, enhanced S Pen for efficient productivity and Samsung’s best-in-class Dual Camera. Exclusively for the Games, the Olympic Limited Edition showcased a shiny white back glass to celebrate the winter theme, and gold Olympic rings – inspired by the Olympic Torch as well as an expression of the Olympic Movement with the union of five continents, and unity worldwide.

“We are proud to provide the PyeongChang 2018 Olympic Games Limited Edition to all athletes in an effort to help them stay connected, capture and share one of the most memorable moments of their lives.” said Lee Young-hee, chief marketing officer and executive vice president of Samsung Electronics.

“Samsung’s commitment to the Olympic Movement has increased meaningful connections through innovative mobile technologies over the past 20 years,” said Thomas Bach, president of IOC. “Samsung’s creation of an Olympic Games Limited Edition device reinforces Samsung and IOC’s shared desire to spread the Olympic spirit. Thanks to the enthusiastic support of dedicated partners like Samsung, we are able to provide special experiences at the Olympics time after time.” 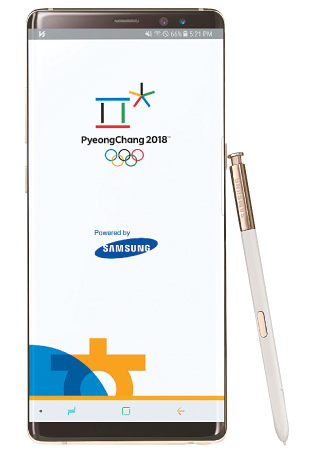 On Jan. 24, Samsung Electronics announced that the Official app of PyeongChang 2018 was available to download. Samsung once again powered the custom mobile application, as an effort to further enhance the Olympic Winter Games experience for all, ensuring smarter communications and smoother wireless operations during the Olympic Games. The Official App of PyeongChang 2018 was created in partnership with the International Olympic Committee and the PyeongChang Organizing Committee for the 2018 Olympic & Paralympic Winter Games. The all-in-one app helps fans better enjoy the Olympic experience by offering real-time updates, athlete information, medal standings and scores. The app offers different content based on location, news updates, ticket and venue information as well as an online cheering service to support athletes.

“We have launched the official app to help create a meaningful and unforgettable experience for all. The company is willing to help everyone in the world enjoy the Olympics comfortably. Through our innovative technology, we hope the PyeongChang Olympics will be a festival all over the world,” said Lee.

The Official App of PyeongChang Olympics is also customizable and the users can receive push-notification alerts, news and results by setting up their favorite sports or athletes. Additionally, up-to-date traffic, tourism, and accommodation information is provided. The app is available in English, Korean, French, Japanese and Chinese, and can be downloaded for free on Google Apps, Google Play Store, and the iOS App Store. 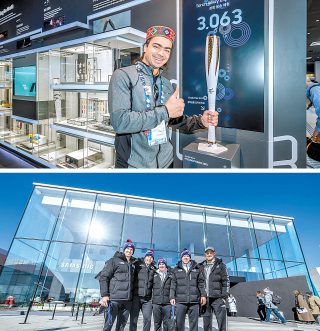 During the first few days of 2018 PyeongChang Winter Olympics, athletes from all over the world experienced breakthrough innovations and interactive activities at the Samsung Olympic Showcase, which opened on Feb. 9. Nine Samsung Olympic Showcases were opened across the country, including at the Olympic Park, the Olympic Village, the Main Press Center and Incheon International Airport.

The Samsung Olympic Showcase was specifically designed to help athletes and fans embrace the excitement of the Olympic Winter Games, enabling them to create, capture and share their own experiences while celebrating the Olympic Spirit. Also Samsung Electronics encouraged fans and athletes to ‘Do What You Can’t’ through immersive mobile, Virtual Reality and IoT experiences at the Showcase.

The Samsung Olympic Showcase in Gangneung Olympic Park, Gangwon, provides visitors a chance to experience the company’s distinguished innovations and virtual reality. Athletes and fans were able to learn about Samsung’s history and heritage in engineering, design, and craftsmanship, and also the history of their partnership with the Olympic Games in the Unbox Samsung zone. They were able to experience virtual reality through the Galaxy Note8 and Gear VR at the Immersive VR Experience zone. “Mission to Space VR: A Moon for All Mankind” was introduced for the first time and visitors experienced a full space mission including a mission briefing, trying on the training suits and helmets, and the truly immersive experience in the Moon rig where they were able to feel like they were on the moon.

“For the last 20 years as a Worldwide Olympic Partner, Samsung has connected fans, visitors and athletes from around the world with the latest technological innovations, allowing them to communicate comfortably and have meaningful experiences” said Lee. “We are delighted to share Samsung’s latest mobile technologies and products for fans and athletes to enjoy new, unique experiences while at the Olympic Games.”