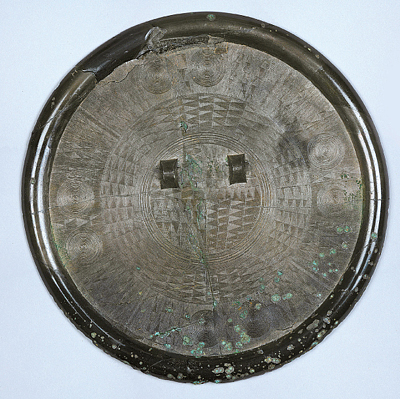 This object was made in the early Iron Age.

There are a couple of knobs supposedly used to link strings on its backside.

The Bronze Mirror with Geometric Design and Knobs on the Back (diameter of 21.2 cm or 8.3 inches), which is kept at Soongsil University, has two knobs.

Its surface is divided into three sections, each of which has exquisitely laid, small, triangular patterns.

The outer section displays four pairs of concentric circles, with each pair consisting of two circles.

The mirror, made chiefly of tin, was designed to reflect sunlight well.

This one is the largest, displaying the most exquisite patterns among the existing Bronze Mirrors with fine linear design.

It is a leading relic representing the early Iron Age on the Korean Peninsula.