‘Pandora’s box is now open,’ says professor about Me Too

‘Pandora’s box is now open,’ says professor about Me Too 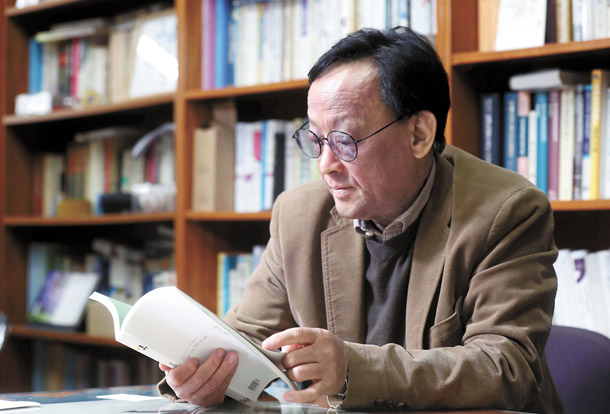 It was in April last year when poet Choi Young-mi, 57, said that she would “speak up more” in an interview with a local newspaper. Nearly a year later, a poem of hers published three months ago in the quarterly literary magazine “Hwang Hae Munwha” caught the attention of social media and marked the start of the Me Too movement in Korea. Titled “Monster,” the piece depicted sexual abuse by a renowned poet, “En,” which referred to the Nobel Prize contender Ko Un. That magazine’s winter edition was dedicated to the theme of feminism.

The person who made the decision to highlight feminism in the issue was the magazine’s editor-in-chief and Inha University’s Korean language education professor, Kim Myoung-in, 60. Strangely enough, Ko had officiated Kim’s wedding.
In November, Kim wrote a newspaper column titled “Regrets in the literary circle.” In the article he said, “Pandora’s box is now open,” and added, “Most sexual misconduct in the literary scene is based on a power relation in which the superior plunders the weak.” The JoongAng Ilbo sat down with him in his office at Inha University.


Q. In November, you simultaneously raised the question of sexual misconduct in the literary world through the newspaper column and the magazine’s winter issue — even before prosecutor Seo Ji-hyeon came forward [with a similar experience with a senior in late January]. Did you see this coming?

A. Feminism is a hard topic to cover. [The edition] came out as a result of multiple trials and observing ongoing discussions inside the women’s rights movement. But it was the murder at Gangnam Station in 2016 when I really started to seriously ponder the issue. It became like homework for me. As an “outdated” progressive myself, the rise in power of current progressive figures — considered “leaders” of the democracy movement in the 1980s — is a big problem. This group has become an establishment of their own on the back of their fight against tyranny in the 1970s and 1980s. Sexual misconduct rooted in power relations is one of the problems created in this process. Sexual abuse was an open secret in the literary scene for quite a long time. Roughly put, it was a behavior allowed [for the superior] and [the damage] was disregarded.


That means there was a power group that allowed such sexual misconduct to be possible. Who would you say sits on the top of that ladder?

There’s really no single leader high up, but a lot of small bosses scattered here and there. They’re not only located in mainstream literature, but even across smaller sectors and rural areas. In any group, including the literary circle, powers of both good and bad help engender hierarchy.

Money gets involved, too. The major capital in literature is major publishing houses like Changbi, Moonji and Munhak Dongnae.
[Networks] help decide if you get space on a magazine to release a new piece or gain contract opportunities with publishing houses. But it also depends on the person.


Is there any possibility of further exposures in the literary circle?

I think the kinds of sexual misconduct serious enough to reach the level of legal offense have mostly surfaced. But sexual harassment is still widespread. This is because the literary circle lacks gender sensitivity and has patriarchy deeply rooted in its culture.

To make things worse, there are some who misunderstand the boundary between freedom and the level of deviation allowed to artists [as a way to criticize the status quo]. An author should abide by social ethics but also should exist beyond them. But if you get the wrong idea about this, it may lead to a corrupt sense of morals and thinking it’s O.K. to bypass the law.

An artist’s deviation is only allowed when it has some purpose, when it is retaliating against the status quo or a system that’s oppressing members of society. Wielding power to cause violence to those weaker than you is not an acceptable behavior even if you are an artist.


The poet Choi Young-mi said she was treated as an outcast for not being submissive to authorities in the literary circle. Opponents say she simply didn’t have the literary capacity [to achieve approval]. How do you view this — is it secondary victimization? Or an organized movement making her an outcast?

Speaking of one’s literary capacity will always remain controversial unless the author has gained immense success or unquestionable approval in literature.

It’s uncertain whether she was devalued and left out based on something other than her writing. If you are building up a realm of your own that can’t be replaced by other authors, then there’s a high possibility that you’ll survive no matter what external difficulties you face. Whether Choi reached that point is a question that requires deliberation, although I don’t think it’s a noise-marketing strategy, as some have asserted it to be.

But what I can say for sure is that barely any chance is given to disobedient people [in this world]. If you have peers who can do similar work as you, you can always be replaced. For instance, if an editor goes against casting an author in a literature magazine, there’s not much reason for another editor to take the risk of possibly starting a fight with the counterpart by going against it. If cases like this pile up, you stop receiving calls for anything.


The world is changing, but the literary circle seems to be living in the past. Are several authors really unaware of the shift or are they just negligent?

The fundamental reason is because the literary circle is so closed. In whatever direction the outside world is going, the continuity of a “We have our own ways” mindset is getting in the way, as we see in the recent string of sex scandals.


Do you think there’s a possibility that the literary circle might change?

Of course. That’s why I view the current issue on sex abuse as positive for the industry. The low gender sensitivity of this society has reached a boiling point, especially with more and more young women challenging society on this matter.

The literary circle is a micro-society that reflects our consciousness and ethics. I believe correction will come fast. Authors who prioritize their honor do have a sense of gender sensitivity.

As we’ve seen in the response from the Association of Writers for National Literature, where Ko Un was a senior adviser, progressive intellectuals are either silent or give slow responses to such scandals, as if they are involuntarily pushed to do so.

That attitude put me at a loss for words. Some say we should consider the fact that gender sensitivity was low in the past and that we should refrain from punishing [people from the old generation] based on today’s elevated standards.

But this is wrong. [What Ko did] is a crime and we have to acknowledge that. There may be many reasons as to why progressives remain silent. One reason they’re reluctant is because they’re all connected to each other in a tight network.

It’s not only Ko’s problem, but a shared issue that has melted down around progressives. The aggressive fight against tyranny in the 1970s and 1980s created a tendency to arm oneself in the most masculine way possible.

This produced the rhetoric of “strong” men in which women were often treated as no more than objects of pleasure. That’s how women were consumed in those days — whether you were a saint or a prostitute.

I understand that context, but nonetheless it should be criticized. It’s about time the progressives came to a turning point and put an end to such old-fashioned customs. And I think the current crisis may be just that.