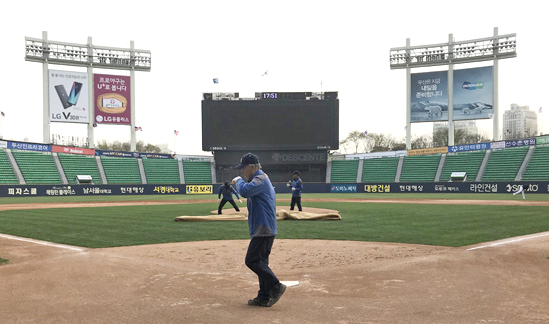 Workers cover the mound at Jamsil Stadium in southern Seoul on Friday as the Korea Baseball Organization regular season game between the Doosan Bears and the NC Dinos was canceled due to a high level of fine dust. [YONHAP]

Three baseball games were canceled due to fine dust on Friday, the first time air quality issues have forced such moves in Korea.

The Korea Baseball Organzation (KBO) regular season game between the home team Doosan Bears and the NC Dinos at Jamsil Stadium in southern Seoul was called off at 5:35 p.m. Friday, about an hour before the scheduled first pitch.

Moments later, the league also cancelled the game between the KT Wiz and the Hanwha Eagles at KT Wiz Park in Suwon, Gyeonggi, 45 kilometers (28 miles) south of Seoul, and the contest between the SK Wyverns and the Samsung Lions at SK Happy Dream Park in Incheon, about 40 kilometers west of the capital.

The KBO cited its rule that states games may be called off if advisories or warnings for strong winds, a heat wave, fog or fine dust are in place.

Two other games on Friday - between the Kia Tigers and the Nexen Heroes in Gwangju and between the Lotte Giants and the LG Twins in Busan - will go on as scheduled.