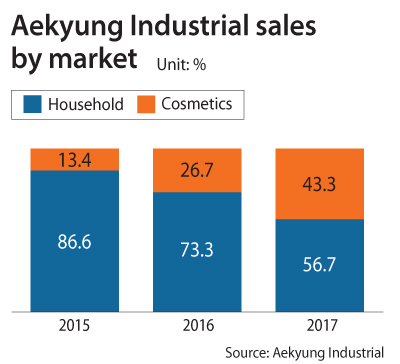 The cosmetics industry grew rapidly based on strong life and beauty markets. Cosmetics sales increased 24.1 percent, while profits grew 24.4 percent for a net income up 76.6 percent.

Beauty products did especially well last year. Cosmetics sales increased 101.3 percent on-year last year, accounting for 43.3 percent of Aekyung Industrial’s sales. This is a considerably jump from just two years ago, when cosmetics accounted for 13.4 percent of sales, growing to 26.7 percent in 2016.

Exports to China increased 91.2 percent despite tensions over the deployment of the U.S.-led Thaad antimissile system. The strategy of targeting the online market, rather than direct exports, proved a great success last year. China’s largest online platform Tmall Global named Age 20’s Essence Cover Pact as the best product of the year, showing impressive sales growth. Aekyung has planned to continue to expand in the Chinese market this year after establishing a local subsidiary in Shanghai last September.

Aekyung Industrial was established in 1985 and is the mother company of Aekyung Group. The company’s cosmetics industry has recently taken off, cementing its place as an influential player in the beauty industry.

Aekyung Industrial was listed on the stock market in March.