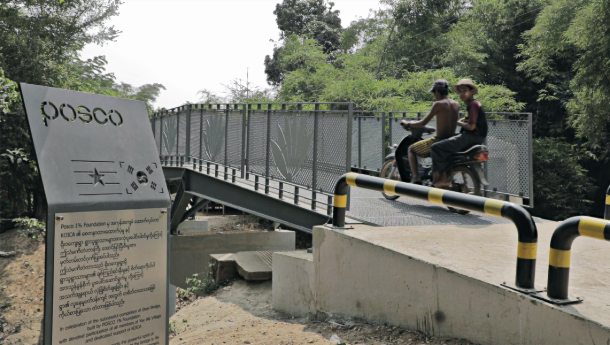 Posco has contributed to local communities since its establishment in 1968. Through its sister village and Posco Volunteer programs and Posco 1% Sharing Foundation, employees and leaders, including the chief executive, are emphasizing the importance of volunteering and sharing.

The local community is the most important stakeholder. The industries centered on Pohang, North Gyeongsang, and Gwangyang, South Jeolla, are operated for the economic advancement and social welfare of the people living there. The main goal is to provide more jobs for the disadvantaged.

Posco also provides support to disadvantaged families of countries it has entered and plan to enter, including Indonesia and Vietnam.
The company’s representative corporate social responsibility program is the Posco Steel Village, and it has decided to keep up social contribution activities in a way that helps the development of the country.

Through the Posco 1% Sharing Foundation, the company’s 20,000 executives donate 1 percent of their pay. Employees have also donated their talent to support people and help them find happiness in life. There are already 25 volunteer centers in cities including Pohang, Gwangyang, Seoul and Incheon’s Songdo. Some of the volunteers share their technological expertise, take photographs and help repair machinery.

Celebrating its 50th anniversary, Posco aims to raise its corporate social responsibility activities to a global level by broadening its view to international issues and lending support to children in Southeast Asian countries with the help of Unesco.


Steel houses for the future

Posco’s Steel Villages reflect the needs of local communities. They contribute to society by providing the safest and firmest building structures in the shortest amount of time. To celebrate its 50th anniversary, Posco is concentrating on steel housing, which was chosen by the United Nations as a leading model for its Sustainable Development Goals.

Posco’s steel house donation program has expanded to families with low incomes. The program started in 2009 as a way to provide steel houses to families whose homes sustained damage after fires. The company has donated 35 steel houses to 20 cities all over the country. As this year marks the 50th anniversary of Posco’s establishment, the company plans to up the ante to 50 houses through July.


A leading model for sustainability

Posco’s Steel Village Project was selected as a leading model for the UN’s Sustainable Development Goals.
The United Nations adopted a statement on the Posco Steel Village project at the 51st UN Commission on Sustainable Development in New York on April 11.
The project was already chosen as a best practice last November and was once again chosen as a leading model. Posco’s effort in solving a global housing shortage has been recognized and evaluated highly.