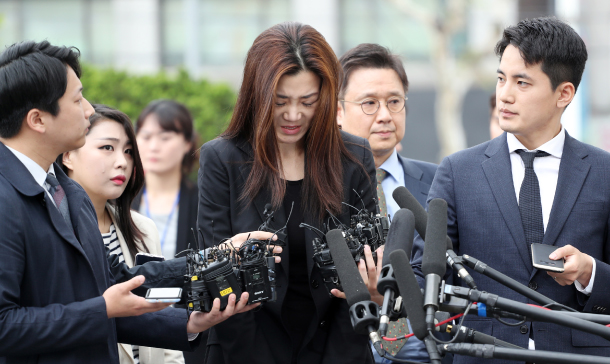 Police questioned Cho Hyun-min, the scandal-ridden heiress of Korean Air, on Tuesday over her alleged fit of rage in which she threw a drink at employees of the airline’s advertising agency last month.

“I am very sorry for troubling you,” Cho said repeatedly when questioned by reporters before entering the Gangseo Police Precinct in western Seoul at around 10 a.m.

There are varying accounts about what exactly occurred during her meeting with an advertising agency on March 16, but most end with Cho throwing a drink at two employees, according to police.

Those who were present told authorities that the drink was fruit juice, but Korean Air claimed in an earlier statement that it was a “splash of water.”

Other accounts said Cho initially threw a bottle, but because it was unopened, she turned to a nearby cup. Korean Air said the cup itself wasn’t thrown.

Additional testimonies from employees suggested the cup was made of glass. That claim is being investigated, police said.

The allegations first surfaced in early April through an anonymous online post. On April 12, Cho issued a public apology in which she called her behavior “reckless” but insisted she threw the cup on the ground, not at employees.

If Cho’s driver is to be believed, the heiress may not be all too concerned about the allegations against her. “She didn’t seem to show much change of heart,” said the driver who took her from the Korean Air building in central Seoul to the police precinct on Tuesday morning. “She didn’t say much other than, ‘Hwagok-dong sure has developed lately’ and mentioning something about the Gayang Bridge.”

Police expected to question Cho into the night.

Cho Hyun-min, 35, is the younger sister of Cho Hyun-ah, 43, known for her “nut rage” tantrum that forced a taxiing plane to return to its gate in 2014. She served three months in jail but returned to the company as president of Korean Air’s hospitality affiliate, the KAL Hotel Network, after a four-year hiatus.

Cho Yang-ho, the patriarch and chairman of Hanjin Group, apologized on April 22 and said his two daughters would leave “every post” in his business empire. His son, Cho Won-tae, is currently president of Korean Air.

The chairman’s wife, Lee Myung-hee and chairwoman of Hanjin’s nonprofit Ilwoo Foundation, is also embroiled in a scandal after a video allegedly showing her verbally and physically abusing employees at a construction site in Incheon in May 2014 went viral. Police are looking into the case.