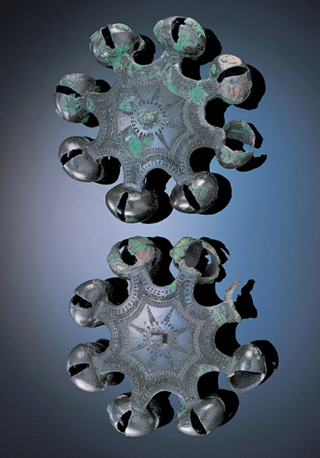 These bells were those used during a ritual in the Bronze Age.

They are said to have been found in Nonsan, South Chungcheong, and they include two paljuryeong (octagonal star-shaped ones with jingling bells attached to the eight edges), two ganduryeong (cannon shell-shaped bells), an “Ω”-shaped bell, and two dumbbell-shaped ones.

Paljuryeong makes a jingling sound when shaken, whereas Ganduryeong has very complicated and exquisite patterns.

The “Ω”-shaped bell works in the same way Paljuryeong does.

There are bells at each end.

They all display highly skilled workmanship, serving as important relics for those studying religion or rituals of ancient times.