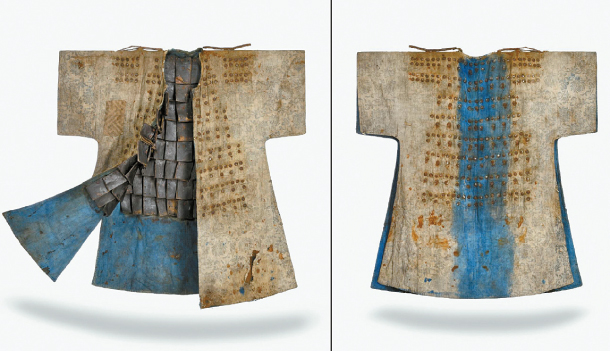 The front and back of the leather armor from the Joseon Dynasty (1392-1910) returned to Korea from Germany’s Mission Museum of the St. Ottilien Archabbey. [OVERSEAS KOREAN CULTURAL HERITAGE FOUNDATION]

Leather armor from the Joseon Dynasty (1392-1910), a rarity in Korea, was returned to Korea from a museum in Germany and shown to the media at the National Palace Museum of Korea in central Seoul on Wednesday.

“The Mission Museum of the St. Ottilien Archabbey returned the armor to Korea in January,” the Overseas Korean Cultural Heritage Foundation said in a statement Wednesday. “It is leather armor that was worn by a soldier in the Joseon Dynasty, which makes it a rare relic both in and out of Korea.”

The cotton exterior of the armor, which opens in the front, is 50.5 centimeters (1.65 feet) from shoulder to hem with a 99 centimeter shoulder width.

The protection comes from thick overlapping squares of leather that hang in rows from the cloth and protect the soldier’s chest and back.

There are three Chinese characters written on the inside of the armor that read Lee, an indistinguishable character and Seo.

“We think that’s the name of the soldier who wore it,” the foundation said.

The foundation said it was in touch with the museum in southern Germany about the armor since 2017, and the museum “acknowledged the value of the armor and decided to return it to Korea.”

“Wolfgang Oxler, the head of the monastery, and Theophil Gaus, director of the museum, told us that they hope the armor will be able to contribute to research here about armor in the Joseon Dynasty,” the foundation said. “We do not know how the armor traveled from Korea to Germany, but our guess is that a missionary in Korea in the 20th century brought it with him or her when returning to Germany.”

The armor, which was shown Wednesday at the National Palace Museum of Korea to members of the media, will be part of the permanent collection of the museum, but will not be shown to the public until the museum completes some preservation work, the foundation said.

“The armor came to Korea on Jan. 24, but we showed it to media today in a special ceremony welcoming museum director Gaus to Korea,” said the foundation.

The Mission Museum of the St. Ottilien Archabbey was established in 1911 and has a collection of items brought back to Germany by missionaries stationed in Korea and countries in Africa.

The museum had previously donated to the foundation a set of paintings by Joseon Dynasty artist Jeong Seon, a collection of botanical specimens from Korea taken between 1909 and 1928 and a record of a family register in the Jeolla region in the 17th century.