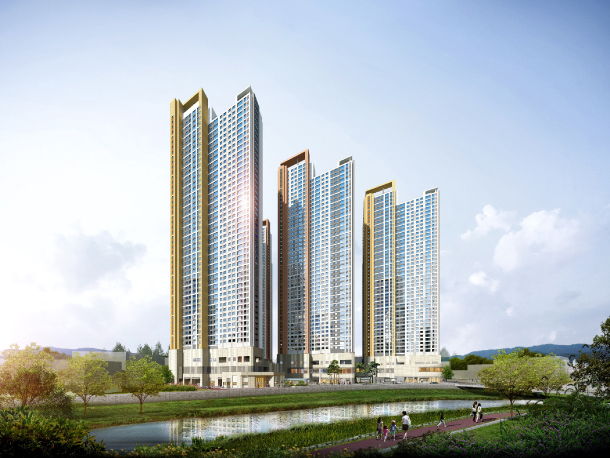 Hyundai E&C started sales at its Hillstate Geumjeong Station apartment complex. It has a hybrid shopping mall that is conveniently located and has many amenities. [HYUNDAI ENGINEERING & CONSTRUCTION]

Hillstate Geumjeong Station has five 49-story buildings that can house 1,482 households in its 843 apartments and 639 studio apartments.

Hillstate Geumjeong Station is located next to convenient train station area, and the area has little traffic. Geumjeong Station is on Seoul Metro lines No. 1 and 4, and the apartments are directly connected to the subway station. Residents can get to Yongsan Station in about 30 minutes and Sadang Station in about 20 minutes. In addition, the Seoul Metropolitan Rapid Railway GTX C, a line linking major areas in the Seoul metropolitan area, is also under construction. When it begins its service, users can arrive at Samseong Station in 10 minutes after only three stops.

The proximity of the Sanbon and Pyeongchon expressways also makes it easy to drive to other areas, and the Route 1 and Gunpo roads are also easily accessible.

Inside the Geumjeong Hillstate complex, a grand shopping mall will be constructed.

The mall is the first hybrid mall, which combines a street mall with an indoor mall, in Anyang and Gunpo. The mall will have fashion shops, a food court, brunch zone, book cafe, kids theme zone and a 600-seat multiplex.

The mall will also have a Homeplus, Emart, Lotte Department Store, New-Core Outlet and PyeongChon Arthall to support a comfortable lifestyle.

As for education, elementary schools, middle schools and high schools are located nearby, in addition to the Pyeongchon institute street, which has many famous academies. The street is one of the best areas for private educational institutes along with Daechi-dong in southern Seoul and Mok-dong in western Seoul.

The nearby Anyang stream, Sanbon stream and Hogye neighborhood park will provide a pleasant life for residents.

Hillstate Geumjeong Station will feature Hi-oT technology, which is an Internet of Things (IoT) system created by Hyundai E&C.

Apartments can be opened using a smartphone, and lighting, gas, heating and ventilation can be controlled with apps. Home appliances, including air conditioners, robot cleaners and air cleaners can be connected using IoT and controlled over long distances.

A lot of energy can be saved with home energy management systems that control lights, a power shut-off system, temperature controls and LED lights. There are safety cameras at the front entrance, an LED lighting system and an electric car charging facility. These will all help make residents’ lives safe and comfortable.