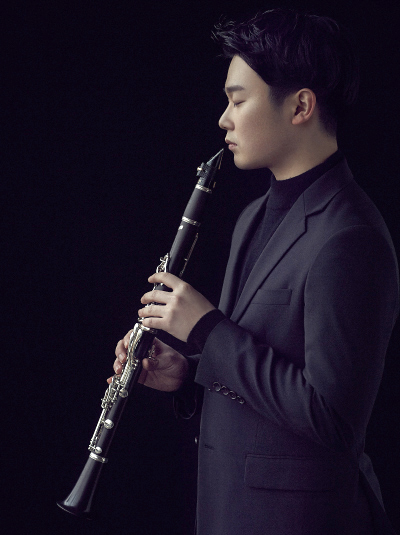 The clarinet is a woodwind instrument that doesn’t exactly stand out in the orchestra. Despite this, the clarinet is still essential to bridging and harmonizing the high notes from violins with the lower tones from bass instruments.

“It’s an average instrument,” said 22-year-old clarinetist Kim Han. “In that sense, the instrument and I have a lot in common.”

“In an orchestra, the clarinet is not an instrument that creates a central sound, but its sounds really blend well with all the other instruments,” he said. “People say that a musician and the instrument he or she plays resemble each other more and more as time passes, and I really agree with that. I am the kind of person who gets along well with everyone.”

Many classical music festivals invited Kim to perform, including Japan’s International Clarinet Festival and Ikoma Music Festival, Tokyo Asian Clarinet Festival, the German Ostfriesland Music Festival and England’s Hemihelp Charity Concert, among many others. In 2016, Kim won two out of the three special prizes up for grabs at the Jacques Lancelot International Clarinet Competition in France - the Prize of the Public and the prize for the best interpretation of Fuminori Tanada’s “Sommerwind V.”

On Sunday, for the first time in eight years, Kim staged a solo concert in Korea. His show at the IBK Chamber Hall of the Seoul Arts Center was part of this year’s Ditto Festival, an annual classical music event.

Kim will be performing once again as one of the members of Ensemble Ditto at 8 p.m. on June 23 at the Lotte Concert Hall in southern Seoul. To hear more about Kim, who delighted his fans after being away from the Korean stage for eight years, the Korea JoongAng Daily sat down for an interview with the clarinetist last week.

Q. It didn’t take long for you to be labeled a clarinet prodigy. Do you think you were born with musical talent, as you are from a musical family?

A. I think so. I don’t know if I’ve given enough effort to say that all my achievements are the result of my own blood, sweat and tears.

As many people know, my grandmother was a renowned soprano. When I was younger, I spent a lot of time at my grandmother’s house, as both of my parents worked. Many students came by to take lessons from my grandmother, and I naturally listened to a lot of classical music. My uncle is also a renowned gugak (traditional Korean music) musician, and one day, he listened to me playing my recorder. He told me that I played it so sorrowfully that one day he suggested that I learn the clarinet as it’s quite similar to the recorder.

You were recently appointed as the second solo clarinet in Finland’s Radio Symphony Orchestra. So far, you have been quite active as a solo clarinetist. Why did you decide to join an orchestra?

Of course, the clarinet can also do well as a solo instrument but it is not that easy to really stand out as a solo clarinetist among the other solo instruments, like the piano or violin. Moreover, considering my character, I think I would enjoy my career more as a member of an orchestra performing together with others. When I look at solo artists, they travel alone all the time and don’t really get to mingle with other musicians as much. So I’m really looking forward to starting my new career in September.

Can you give our readers an introduction to the upcoming performance on June 23?

In the program, there’s Bela Bartok’s “Contrasts,” which is for the clarinet, violin and piano. It is based on Hungarian and Romanian dance melodies. I am really fond of this piece as I practiced it a lot for a competition back in middle school. Back then, it was so difficult, and I couldn’t master its technicalities. As I came back to this piece after many years, I noticed that the techniques I couldn’t master back then I can do well now.