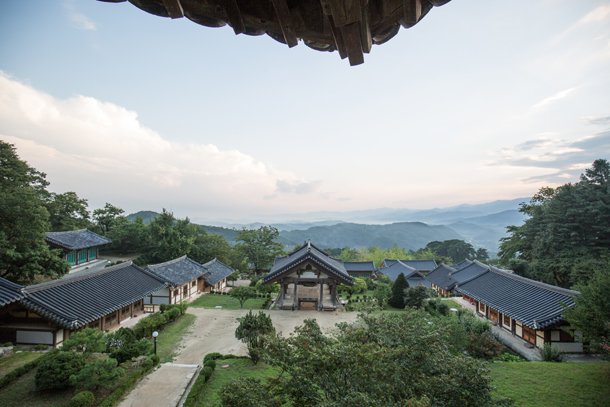 Buseok Temple, above, is one of seven Korean sansa, or mountain temples, that joined Unesco’s list of world heritage sites on Saturday. [COMMITTEE TO PROMOTE THE UNESCO INSCRIPTION OF SANSA]

The decision was announced at the 42nd session of the World Heritage Committee in Bahrain.

In May, the Unesco preliminary review panel recommended only four monasteries among the seven submitted by Korea’s Cultural Heritage Administration (Cultural Heritage Administration) last January, which includes Tongdo Temple, Buseok Temple, Beopju Temple and Daeheung Temple. The International Council on Monuments and Sites had judged that the other three lack historical value and were smaller than the others.

In an effort to get all seven monasteries on the list, the Cultural Heritage Administration formed the Committee to Promote the Unesco Inscription of Sansa and submitted supplementary information including a sheet correcting errors in the initial submission. It also lobbied other member countries for support.

According to the Jogye Order of Korean Buddhism, the international council accepted 11 out of 12 corrected items on the correction sheet, leading the committee to make the final decision on Saturday of including all seven temples.

The Unesco World Heritage Centre judged that the sansa have “outstanding universal value” in upholding Korea’s Buddhist tradition since the 7th century and that each is considered a “comprehensive monastery.”

[COMMITTEE TO PROMOTE THE UNESCO INSCRIPTION OF SANSA]

The spatial arrangement of the seven temples “present common characteristics that are specific to Korea,” Unesco said, such as a madang (open courtyards) flanked by four buildings: the main hall, a pavilion, lecture hall and dormitory.

The temples “contain a large number of individually remarkable structures, objects, documents and shrines,” Unesco said. “These mountain monasteries are sacred places, which have survived as living centers of faith and daily religious practice to the present.”

Following the official inscription, the Unesco World Heritage Centre advised the Cultural Heritage Administration to come up with measures for dealing with an increase in visitors. It also recommended preservation and maintenance plans for the buildings since they are at least 1,000 years old.

“We will make sure the inscribed sansa are well managed,” a Cultural Heritage Administration spokesperson said, “so that they keep up to the standard of Unesco World Heritage sites.”

Jong Min, a monk in the Jogye Order who was present at the Unesco session in Bahrain, said that he was “pleased at the news, especially at the fact that all seven have been inscribed together.”

“The inscription attests that the world is acknowledging the true historic value of sansa and that these temples exist as a cultural heritage site,” he said. “We’ll continue to make efforts to maintain its world heritage standard.”

The temples join 12 other Korean sites on the Unesco list, including Jongmyo Shrine in Seoul; historic areas in Gyeongju, North Gyeongsang; Jeju Island and its lava tubes; and the Royal Tombs of the Joseon Dynasty located across the country.