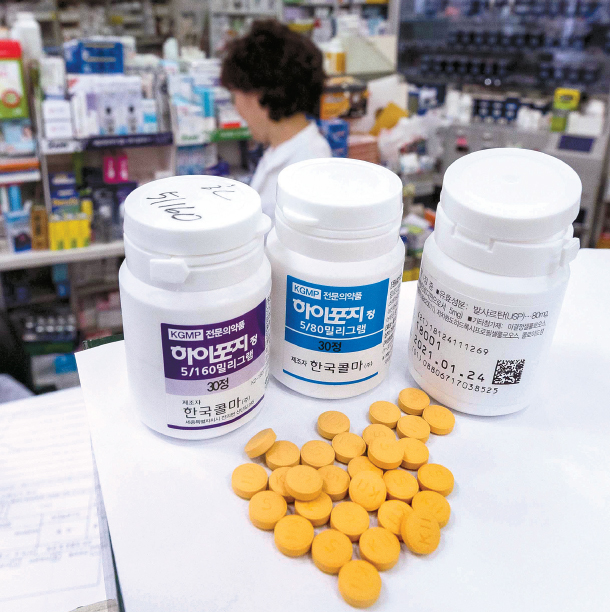 Drugs for high blood pressure sit on the shelf of a pharmacy in Seoul on Monday. The Ministry of Food and Drug Safety banned the import and sale of 115 hypertension drugs out of fear that they might contain carcinogenic ingredients. [NEWS1]

The Ministry of Food and Drug Safety on Saturday banned the import and sale of all drugs containing traces of a possible carcinogen after it was found in Valsartan, a key ingredient in drugs commonly prescribed for high blood pressure.

N-Nitrosodimethylamine, or NDMA, is an organic chemical often produced as a byproduct of industrial processes and present in low levels in food that is smoked, cured or cooked. The International Agency for Research on Cancer, part of the World Health Organization, classifies the chemical as a group 2A “possible carcinogen.” The designation is given when there is limited evidence of the agent’s carcinogenicity on humans.

“Despite the lack of conclusive evidence on whether NDMA is present in these products or whether they are truly dangerous, these measures were undertaken to pre-emptively protect consumers,” a spokesman for the Ministry of Food and Drug Safety said on Saturday.

The ban first applied to 219 drugs containing Valsartan, but the ministry reduced the list to 115 products on Monday after a review. The ministry said its decision to ban the hypertension drug came after the European Medicines Agency, the drug regulator for the European Union, announced it had found NDMA in Valsartan made by Zhejiang Huahai Pharmaceutical in China last Thursday.

The European Medicines Agency believes NDMA entered the hypertension drugs as a result of Zhejiang Huhai changing its production process. The agency banned sales and recalled all drugs containing Valsartan made by the Chinese company. The agency said it would evaluate the severity of the problem and the effects that the possible carcinogen might have on patients who are currently taking drugs containing Valsartan. 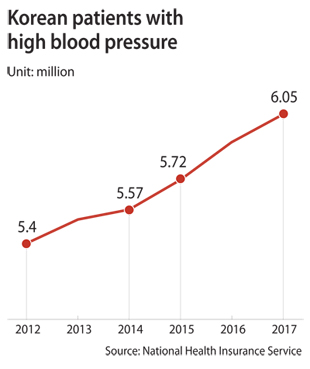 Not all products containing Valsartan, however, contain NDMA. First created and sold as Diovan by the Swiss pharmaceutical company Novartis, Valsartan is now present in hundreds of generic drugs after Novartis’ patent expired in 2012. The original, Diovan, is currently the third-most popular hypertension drug in Korea.

“Out of the 2,690 hypertension drugs that are licensed for sale domestically, 571 of them contain Valsartan,” said Kim Yu-mi, head of the Drug Review and Management Division at the ministry, “and 219 out of these contain Chinese-made Valsartan, but if we conduct a review of available data and on-site investigations, we may discover that the problematic drugs are fewer than this number.”

Over 484,682 kilograms of Valsartan have been imported to Korea over the last three years, according to the ministry, but only 2.8 percent, or 13,770 kilograms, contain ingredients from China. After its announcement on Saturday, the ministry launched on-site investigations of 82 pharmaceutical companies to check whether the drugs contain NDMA.

Because high blood pressure is a chronic disorder that requires long-term treatment, concerns abound that Korea’s six million patients that depend on hypertension drugs may have already been exposed to carcinogens for an extended duration.

“I’m astounded that carcinogens were found in medicine that is supposed to fix my disease,” one patient said. He had been taking a recently banned drug for over two years.

On an online forum of hypertension patients, there were hundreds of questions asking whether it was safe to take drugs for high blood pressure.

Oh Beom-jo, a professor of family medicine at Dongguk University Medical Center, said, “Patients will be confused about whether their drugs are problematic or not.” He said the government needs to devise a system to alert patients if unforeseen problems arise concerning their medicine.

On Saturday, the Health Insurance Review & Assessment Service revised its Drug Utilization Review, a computerized pharmaceutical review system that oversees prescriptions, to display an on-screen warning when doctors try to prescribe a banned drug on their computers.

In addition, the Ministry of Health and Welfare is looking for ways to inform patients of their pharmaceutical history through the Drug Utilization Review software and said it has already granted full health insurance coverage for patients who were taking the contaminated drugs and need alternatives.