The lawyers whom asylum seekers call for help

The lawyers whom asylum seekers call for help

The arrival of more than 500 Yemeni asylum seekers to Jeju Island has divided the Korean public. On one side are those opposed to the country’s acceptance of refugees; on the other are supporters who insist they can coexist in Korea’s monoethnic society.

Standing on the front lines are the Advocates for Public Interest Law, a group of lawyers who take on asylum cases. Kim Jong-chul, a graduate of the Judicial Research and Training Institute, founded the organization in 2011 to provide legal counseling for refugees, asylum seekers and migrant workers. Four more lawyers have joined him since. 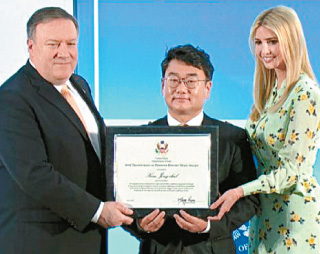 The attorneys, all in their 30s and 40s, do not take any fees from clients, instead relying on donations from about 600 supporters. They work out of a small office in Jongno District, central Seoul, and each lawyer earns an average 2.5 million won ($2,284) a month. Their motto is “walking together for values.”

The bulk of their work involves appeals for denied asylum seekers and researching refugee protection in Korea. The five lawyers also give media interviews, contribute columns and participate in debates.

The JoongAng Ilbo recently spoke to all of the lawyers except for Kim, who was in the United States to accept a State Department award for his work in representing migrants.

After graduating with a degree in computer science from Sogang University, Chung worked as a software developer at Samsung Electronics for two years. The job was cushy, but she wanted to do something more meaningful, so she applied for Handong International Law School and was admitted to its U.S. law program.

While in law school, Chung interned at the Advocates for Public Interest Law. “I realized then that this was a really important job,” she says. “I wasn’t necessarily well versed in human rights before that.”

Now a full-time lawyer at the organization, Chung helps asylum seekers with their applications. Still, Chung says she understands people’s opposition to refugees.

“Accepting refugees can be troublesome, burdensome, difficult and even scary,” she says, “but our future depends on whether or not we accept those who are scared for their lives. This is our generation’s mission.”

Before joining the Advocates for Public Interest Law, Kim dreamed of a well-paying job. She studied economics at Seoul National University, one of the country’s most prestigious schools, and took the bar exam six times, but she failed with each try. Eventually, Kim found herself at Ajou University Law School, where she had another chance at becoming a lawyer.

Like Chung, Kim first joined the Advocates for Public Interest Law as an intern in 2011 and decided to stay.

The lawyer chalks Korean society’s reaction to the Yemeni asylum seekers to sensationalized reports on the European refugee crisis.

“Things got worse when rumors spread that most Yemeni asylum seekers were not really refugees and that they only came here for jobs,” Kim says. “I hope that people know they actually came here to escape persecution.”

Kim assures the path toward asylum is difficult. “If people just looked a little closer, they’d be able to see that the screening process isn’t being abused by ‘fake refugees’ but is actually denying asylum to real ones,” she says. “The process is that rigorous.”

Unlike Chung and Kim, who entered law late, Lee always knew he wanted to be an attorney. He studied the subject at Seoul National University and passed the bar exam after graduating from school.

According to his classmates at the Judicial Research and Training Institute, where lawyers-to-be attend after passing the test, his scores were high enough to become a judge or a prosecutor. Instead, he decided to join the Advocates for Public Interest Law in 2013 after a stint in the military.

“I thought being a judge would be boring,” Lee says, “and I didn’t want to be a prosecutor because I’d have to punish other people. Working at a law firm and representing corporations wouldn’t have been worthwhile either.”

“People who are dissatisfied with the current distribution of wealth and social justice are taking it out on the weakest people,” he says. “Our social problems are being projected onto refugees.”

Still, he’s holding out hope for change. “We may be divided now, but I think it’s great that people are talking about refugees,” he says. “The Blue House and Ministry of Justice are hesitant to do anything right now, but they need to do a better job explaining the significance of protecting refugees to the people.”

What sets Jun apart from her colleagues is that she intended to work pro bono from the beginning.

“I wanted a job at one of the big corporations,” she recalls, “but none of them would accept me because I was a female humanities major who didn’t work in business. Some of them wouldn’t even let me apply. I felt like the entire world was shutting me out. That’s when I thought I should help other people who feel like outcasts in a professional way.”

Like the others, Jun is sympathetic to the public’s concerns about refugees, no matter how misplaced they may be.

“Our social safety net is flimsy at best, and lots of Koreans lead unstable lives,” she says. “Of course people wonder why they should help strangers when they themselves are struggling, but they can change their minds once they learn what’s really going on in Yemen.

“There is a lot of misunderstanding right now,” she adds, “but I hope the younger generation sympathizes more with people who have been rejected. In fact, our society is full of young people who are in situations not unlike those of refugees.”