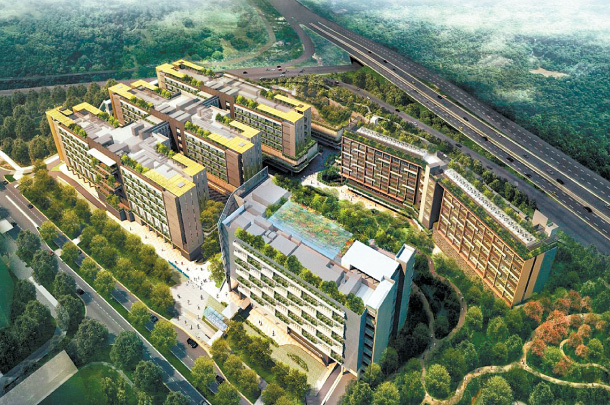 A computer rendering shows the Woodlands Health Campus to be built by a consortium led by Ssangyong Engineering & Construction in Singapore. [SSANGYONG E&C]

A consortium led by Ssangyong Engineering & Construction won a contract from the Singaporean Ministry of Health to build a smart hospital.

For this bid, the Korean companies were able to avoid a price-war by teaming up in a consortium and beating competitors through healthy competition on construction technology.

Bids were judged on alternative design ideas and price competitiveness. The Ssangyong E&C-led consortium was one of four shortlisted for the project.

The consortium’s bid included an efficient and improved plan for the construction of the smart hospital. The consortium was finally selected after inspections of previous sites designed and built by all four final bidders, one-to-one discussions, post tender interviews and safety management examinations.

The 1,800-bed hospital will cover 246,000 square meters (2.64 million square feet) in Woodlands, a planned residential town in the northern part of Singapore.

The hospital will include an acute care hospital, a community hospital, specialist outpatient clinics and a nursing home, with the aim of offering a broad range of medical services on a single site.
Construction is expected to take 33 months.

A spokesman from Ssangyong E&C said the project is meaningful as the formation of the consortium helped to avoid a price war and stopped a Japanese company that has been monopolizing the construction of Singapore’s big hospitals.
The latest contract means that Ssangyong E&C has now won bids for advanced medical care facilities with a combined 12,000 beds, a new record.