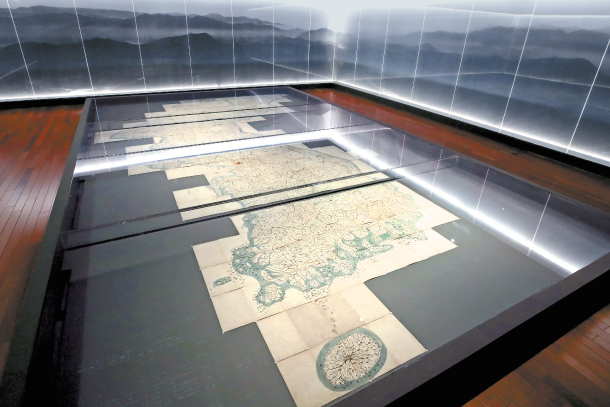 A large Daedongnyeojido, or “Territorial map of the Great East Korea,” which was created by Kim Jeong-ho in 1861, is the largest existing map of Korea, measuring 6.7 meters (22 feet) by 3.8 meters. [YONHAP]

Outside of map collectors and geography fanatics, it’s difficult to find people carrying physical maps with them these days. In the past, it was impossible for travelers to go anywhere without studying a map, but navigation systems and smartphones can now tell you where to turn and even suggest the fastest route in real time. The latest exhibition at the National Museum of Korea in central Seoul showcases an array of Korea’s ancient maps, which are becoming rarer each day.

“Whenever I saw the maps of Joseon, I was amused by how advanced they are as well as their aesthetic beauty,” said Bae Ki-dong, director general of the museum. “Visitors will definitely be able to feel the emotions of our ancestors in the maps they created.” 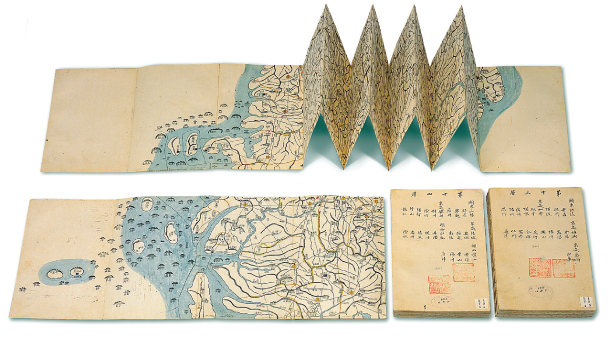 For example, in some of the maps of the world, the Korean peninsula is depicted so large next to China that “what is important here is not the exact measurements or ratio but how our ancestors wanted to view Korea as a powerful nation,” told curator Baek Seung-mi in a recent press preview.

According to Baek, Koreans have been creating maps for over 1,500 years, ever since the Three Kingdoms Period (57 BC-668 AD). Maps created during the 500 years of the Joseon Dynasty in particular are praised as significant accomplishments in the history of East Asian cartology, cartography and historical geography, Baek added.

It’s the first time that the National Museum of Korea is using two halls for a special exhibition, not to mention the first time for any museum to so comprehensively display such a wide range of Joseon maps. There’s also one National Treasure on display, the Map of the Korean Territory, or Joseon bangyeok jido, (No. 248), created around 1557.

“I first thought there were too many on display,” said Bae, “but I couldn’t agree more with the curator that they are all too significant to be taken out after going around the exhibition.”

The exhibit is divided into four parts under different themes of Space, Time, Humans and Chronicle.

The first section is where visitors can witness how Koreans in the Joseon Dynasty perceived the world through numerous maps portraying the world.

“One of humanity’s most primary desires would be to understand their own surroundings, and determine where they stand,” said Baek. “Joseon people also tried to understand that by creating maps to reflect the way they viewed the world.”

That view, according to Baek, basically pictured East Asia as the world’s center, and the Joseon people apparently wanted to define themselves as the successor of the “essence of East Asian civilization, as we can see from Joseon maps of the time, which visually embody such intents,” she added. Many of the world maps displayed in this section also mirror well the history of the Joseon people’s contact with Western civilization and their efforts to embrace it. This section also has numerous maps of the Korean peninsula, created by famous geographers and cartographers including Jeong Sang-gi (1678-1752) and Shin Gyeong-jun (1712-81).

The Time section displays maps that feature not just geographical aspects but also records of history of the regions in text as well. According to Baek, creating a map that includes information is a proud tradition of East Asian cartography. 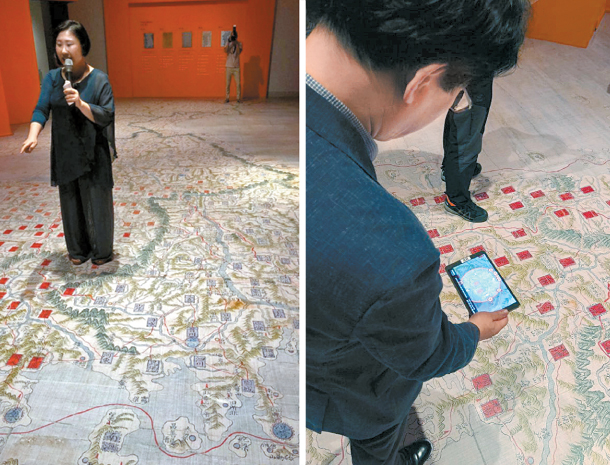 Curator Baek Seung-mi, top, explains the augmented reality section, where visitors can use their smartphones, above, to navigate a print of a Donggukdaejido (Treasure No. 1538). [YIM SEUNG-HYE]

“They were like history map books,” said Baek, “as they showed the readers figures and events with historical significance.”

The highlight is in the third section where visitors can view the large Daedongnyeojido, or “Territorial map of the Great East Korea,” which was created by Kim Jeong-ho in 1861. This version is the largest existing map of Korea, measuring 6.7 meters by 3.8 meters. Since this map cannot be hung up, it is spread on the floor inside a glass case.

Other interesting maps can also be seen at the final section, which include maps of Korea created by foreign mapmakers including “Carte du Royaume de Coree,” which was created in 1737 by a French geographer Jean Baptiste Bourguignon d’Anville, and “The Empire of Japan with the Kingdom of Corea” by Robert Sayer in 1790.