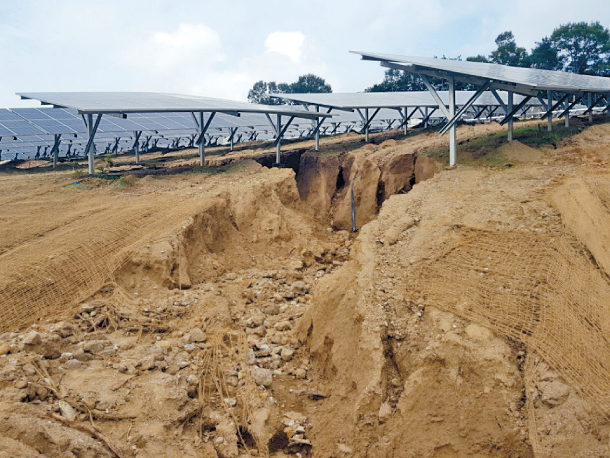 A two-meter (6.5 feet) pit formed near a solar power generation facility in the village of Seongjae-1 Ochang-eup, Cheongju, North Chungcheong, after heavy rainfall recently. Landslides have exposed the steel frame of the structure. [CHOI JONG-KWON]

Shin Eon-gwan, a 62-year-old farmer in a rural town in Cheongju, North Chungcheong, heaves a sigh Monday as he stares at his cassia seed field.

It is inundated with mud from a landslide.

Shin’s field is just below a 29,000 square meter (312,000 square feet) solar power generation facility atop a mountain in the agricultural town of Ochang-eup. This solar facility, carved into the ridges of a mountain overlooking farmland, is two months away from opening. Hundreds of solar panels are installed.

But over 100 millimeters of rainfall recently fell in Cheongju, leaving the construction site a muddied mess.

Rainwater streaming down the mountainside carved pits and ravines in the slopes, and in some places, steel frames that were sunk some 1.5 meters into the ground have been exposed.

“Because of the sudden heavy rainfall, landslides have blocked the drains and the water flowed down to the farmland,” a construction site manager surnamed Shin said. “There is no problem with the construction, though.”

But the same company is building a solar power generation facility one village away and it is plagued by similar problems. A two-meter pit has formed by the construction site, while runoff water from the slopes has inundated farmland below.

“I’m worried that the rice won’t grow properly because of the mud,” said a 67-year-old resident of the Seongjae-1 village, surnamed Jeon, lamenting the state of his rice paddy. “Since the installation of the solar energy facility, whenever it rains, the drains and waterway are blocked.”

Solar power plants meant to be environmentally friendly are instead wreaking havoc on the environments in which they’ve been built. As in Ochang-eup, other neighborhoods with solar energy facilities have suffered damage from landslides due to the heavy rainfall this summer.

On Aug. 29, a solar power plant construction site in Galmal-eup in Cheorwon County, Gangwon, suffered from a major landslide after a 10-meter crack in an embankment. Two houses were buried in the incident, and 10 construction workers and villagers had to evacuate the site.

In Jeju last month, a set of solar panels was ripped off a roof as Typhoon Soulik approached Korea on Aug. 23, collapsing on a neighboring house.

On Aug. 3, a solar power facility on a hill in Maejeon-myeon, Cheongdo County, in North Gyeongsang, collapsed partly after a landslide.

Residents of the Seongjae area in Cheongju have blamed the city government for granting permission to construct solar power generation facilities so near farmland.

A Cheongju city official said, “While there are ordinances in Chungju or Jecheon [other cities in North Chungcheong] that solar power generation facilities have to be built 200 to 500 meters away from roads, there are no such regulations in the city of Cheongju.”

Experts say that in the construction of such solar power facilities, characteristics of the soil have to be taken into consideration since trees are cut down and landscape changed.

“It is not right to issue a permit [for construction] just because there is no legal problem, without taking into consideration the surrounding environment,” said Yang O-bong, a chemical engineering professor at Chonbuk National University. “Such construction has to take place according to the characteristics of the ground and soil in order to prevent damages, and after an inspection by experts. There is also a need for the central government to create uniform regulations for such installations because standards differ between each local government.”