A jesa table for modern Koreans: In time for Chuseok, Arumjigi suggests ways to ‘uphold traditional culture in a creative way’

A jesa table for modern Koreans: In time for Chuseok, Arumjigi suggests ways to ‘uphold traditional culture in a creative way’ 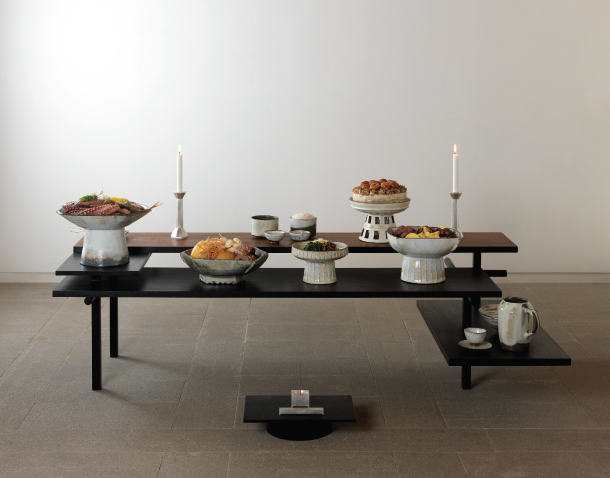 There’s only a week left until the country’s national holiday Chuseok, or Korean thanksgiving. Some may be looking forward to the long holiday but for many women, it’s a time they dread, as most of them will be spending all day in the kitchen, preparing a large feast for their husbands’ ancestors.

Known as Charye, women usually prepare up to 30 dishes to go on the jesa (ancestral ritual) table during Chuseok. This national holiday originated as a ritual in which the first crops of the season are dedicated to ancestors, but it gradually became more than just a harvest festival, especially for strictly Confucian families.

Due to the labor required during the holiday, Arumjigi, a nonprofit foundation founded to protect and preserve traditional Korean culture, believes that the concept of paying tribute to ancestors has disappeared and has became a mere formality. To revive the essence of charye, Arumjigi decided to suggest a contemporary version of jesa table through an exhibition titled “Ancestral Rites for Modern Times.” The exhibit kicked off on Sept. 8 at the foundation’s three-story center near Gyeongbok Palace in central Seoul. 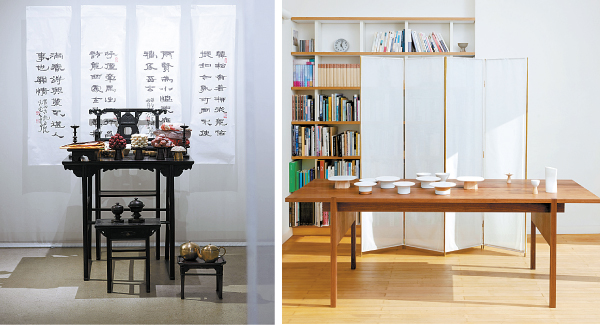 Arumjigi has worked with experts in Korean cuisine, crafts and design to introduce a modern jesa table.

“After studying the essentials of rituals, the formalities should be updated for our time but retain the identity of Korean culture,” Hong added. “To make Korean ancestral rites a natural part of family life today, we give them new sensitivity, and attempt to simplify them so that they can be practiced by everyone.” 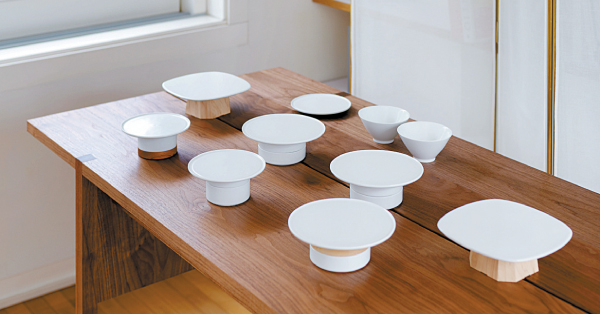 The exhibit starts off by showcasing reproduced jesa table settings of Korea’s prominent scholar families Toegye Yi Hwang (1501-70) and Myeongjae Yun Jeung (1629-1714). Since they represent Korea’s Confucian scholars’ families, whose jesa tables are quite large, visitors may assume that the jesa table needs to have dozens of dishes filling the table, but they are smaller than expected.

According to Shin Hye-sun from Arumjigi, Toegye grew up with a mother who emphasized the importance of thrift. It is said that his family had a rule of only having three side dishes for a meal. 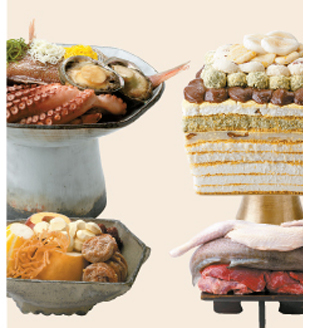 In the other sections of the exhibition, there are displays of different modern table setting for charye that are quite Instagram-friendly.

Craft artists and designers worked together with the Arumjigi to create various plates and dishes that can be used daily as well as for jesa. Traditionally, lacquer varnished jesa tableware has been used, however, the modern designs use porcelain and glass. Many of the plates have so-called heels on them, according to Arumjigi, to show respect for the ancestors. Ceramic artist Lee Ki-wook’s contemporary plates also have heels, but they can be removed for daily use.

Artist Lee Geon-min presents “Nomatic Ritual Tablesetting,” in which all the necessary jesa tableware fit into a small picnic basket-like suitcase that can be carried and stored easily. There are also displays of dining tables that can be transformed into a ceremonial platform and can be set up simply in an apartment.

“These ritual tables can be set up simply by only one person,” said Jeong Hye-gyeong, professor in the Department of Food and Nutrition at Hoseo University, one of the advisers for the exhibit. “We hope the exhibit shows how Korean ancestral ritual culture can still be honored by looking at how it was long ago, and reviving its spirit.”