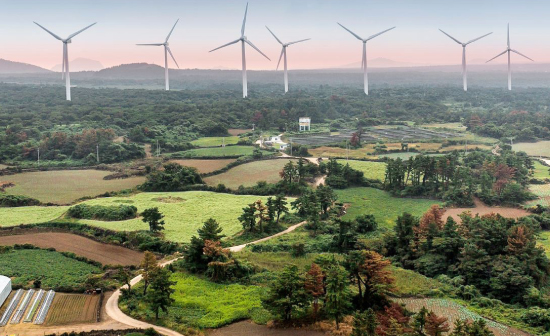 Korea Midland Power (Komipo) has formed the “Quality of Life Improvement Committee,” which operates directly under its CEO and is leading the national government’s tasks. The committee consists of four divisions: Job Creation, Fine Dust Reduction, Expansion of Future Growth Engines and Social Value Realization. Eighteen trillion won ($15.8 billion) will be invested in future growth engines through 2030, and there is a goal of generating 20 percent of total power from renewable energy. The strategy for this is “3-Up”: size up, speed up and share up.

Maebongsan Wind Power Plant repowering, which Komipo is working on, is a project to rebuild the existing Maebongsan wind power plant (8.8 megawatts) and increase its capacity up to 18 megawatts. It is the first large-scale wind power plant repowering project in Korea and is expected to contribute to expanding national wind power generation as a role model for efficiently improving the utilization rate of resources through repowering existing old facilities. In addition, the company plans to expand offshore wind power in Jeju and reclaimed areas off the west coast which have quality wind conditions, like Hallim-eup in Jeju. Komipo also plans to increase local acceptance of its projects by resolving complaints through community participation projects.

Komipo is also attracting attention in the renewable energy field overseas. Indonesia’s first offshore hydropower project, the Indonesian Wampu Hydropower Plant (45 megawatts), was completed last year. The ongoing Tanggamus Hydro Power Plant in Indonesia (55 megawatts) is expected to be completed this year. In addition to the 114 megawatt Siborpa project that is underway, it is expected to operate hydroelectric power plants that generate over 200 megawatts in Indonesia. In addition, the solar power business in Nevada (total 275 megawatts), which is being promoted with Sunpower, a global renewable energy company in the United States, is expected to start full operation after the completion of the first and second phase projects (150 megawatts).