Park Ji-su is back and ready to shake things up

Park Ji-su is back and ready to shake things up 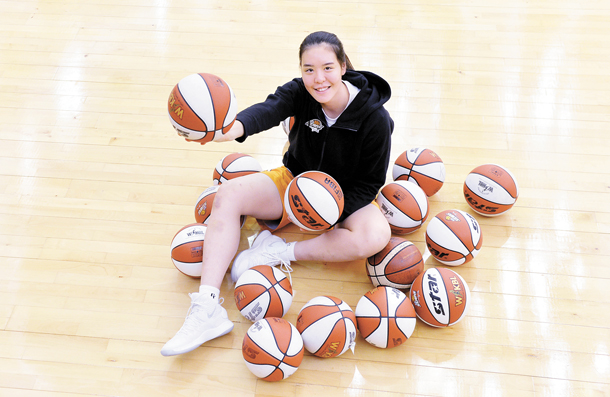 The Asan Woori Bank Wibee has dominated the Women’s Korean Basketball League (WKBL) for years, winning the both the regular season and the championship title for the past six years.

The Wibee’s dominance has even earned them a new nickname - Wooricelona, a portmanteau of Woori Bank and Spanish football club Barcelona. Barcelona, like the Wibee, is known for its strong lineup and dominance of its local league.

But Wibee’s reign might be about to end as Cheongju KB Stars center Park Ji-su is at the top of her game going into her third professional season.

During the 2018-19 season media day on Monday, five of the six head coaches in the league picked the Stars as the most likely team to compete for the title with the Wibee, just because they have Park on the roster.

Starting this season, the WKBL limited each team to have one foreign player on their roster, down from two the previous year. As a result, Park is even more important to the Stars as she is the tallest Korean center, standing at 1.96 meters (six feet five inches).

“A lot of the teams say we have the advantage, but other teams can play better,” said Park. “The Woori Bank, who won the title for six straight seasons, has four national team players. As a challenger, we’ll stay patient throughout the season. Last season during the championship, we lost three straight games to get eliminated. Since we’re the only team in the league without a championship title, I really want to win this season.”

Even before her professional career began, Park was a notable player on the Korean women’s national basketball team, which she helped win bronze for at the 2015 FIBA Asia Cup. After an impressive amateur career, Park turned professional in 2016 with the Stars. She became the highest paid rookie in the WKBL history, signing at 60 million won ($52,900).

She lived up to expectations, winning the WKBL Newcomer Award for the 2016-17 season. During the Stars regular season game against the Wibee in February 2017, Park became the first Korean player in the league’s history to score 30 points and pick up 20 rebounds in a single game.

Following her successful rookie season, Park’s contract jumped up to 200 million won in her second year. Then, in April this year, Park spent four months in the Women’s National Basketball League (WNBA), drafted as the seventeenth overall pick by the Minnesota Lynx. The Lynx released Park, but she was picked up by the Las Vegas Aces and successfully made the roster. By making her WNBA debut, Park became the first Korean player in 15 years to play in the U.S. league.

“In the domestic league, I only needed to play against one or two foreign players,” Park said. “But in the United States, all nine players on the court were foreign players. They were all tall and played so well I almost had a mental breakdown. I tried to mimic the playing style of the world’s top players and tried to learn from them.”

Although she was a dominant player in the WKBL, when she played in the WNBA, she was really only average, finishing the season with an average of 2.8 points, 3.3 rebounds and 0.6 block shots through 13 minutes in 32 games. Due to Park’s disappointing statistics, she received a lot of negative comments from fans.

“I wanted to play well, too, but I got really depressed from reading the comments,” Park said. “In the WKBL, only 12 players from a team of 15 to 16 players retain their spot after training each year. I’ll keep on challenging myself next year.”

But that wasn’t the end of the season for Park, as she had to compete at the Asian Games. Having competed in more than 70 games throughout the season, there were concerns that Park was going to get too tired during the Asian Games.

Although Park did find herself getting tired from competing in one too many games, she never regretted playing for the country.

“I always have a pride in the taeguk mark,” Park said. “It was tough, but I think it was a good decision to compete in the Asian Games.”

At the Games, Park competed for the unified team and successfully helped them win a silver medal. Along with North Korean player Ro Suk-yong, Park showed great teamwork despite the limited practice time.

“Suk-yong has great ability to score,” Park said. “I think she can play in the women’s basketball league in Korea right away.”

From her dominance in Korean women’s basketball, Park has been rated as the next female center to lead the sport in Korea. However, before gaining popularity for herself, Park is hoping to bring fans back to the domestic league.

“I heard that the popularity of women’s volleyball is unreal,” Park said. “To bring back popularity to women’s basketball, I’m thinking of doing something that’s never been done before, like a dunk shot.”