“Cranes and Peaches” (1902), a grand 12-panel folding screen, is on display at the National Museum of Modern and Contemporary Art Deoksugung in central Seoul for the “Art of the Korean Empire: The Emergence of Modern Art” exhibition. [MMCA]

The Korean Empire’s short history lasts only 13 years. King Gojong (1852-1919) of the Joseon Dynasty (1392-1910) proclaimed the country an empire in 1897, but was soon annexed by Japan in 1910. Because this period proceeded to the country being colonized by the Japanese for 35 years, it has been perceived as an era of dark history, and the art of the Korean Empire has been largely ignored or dismissed, according to the National Museum of Modern and Contemporary Art (MMCA). 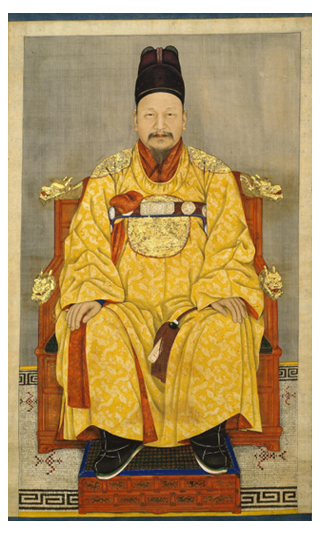 After proclaiming himself emperor, Gojong is featured in a royal portrait wearing a golden robe and a winged headpiece, symbolizing imperial status. The portrait was painted by Chae Yong-shin. [MMCA]

However, it was this period, says Bartomeu Mari, director of the MMCA, that the “foundations of 20th-century Korean art were laid, deviating from the previous trend of the day, which was to reject foreign influences and preserve national heritage.”

In other words, if it was all about shunning foreign influences before, Emperor Gojong had a vision to embrace foreign elements as a way to improve rather than replace the existing traditions of Korea. To give visitors a better understanding of this vision of Gojong, MMCA has organized an exhibition at MMCA Deoksugung in central Seoul, which recently celebrated its 20th anniversary. Titled “Art of the Korean Empire: The Emergence of Modern Art,” the exhibit attempts to comprehensively show various types of art - including painting, photography and handicrafts - from before, during and after the Korean Empire to show how the era was “unquestionably a formative time in art history, laying [the] foundation for Korean modern art.”

In the first section titled “Art of Empire,” visitors can witness the transformation of Gojong’s portrait painting as he proclaimed himself an emperor. Painted by Chae Yong-shin (1850-1941) in the early 20th century, the portrait depicts Gojong wearing a golden robe known as a hwangryongpo and a winged headpiece called ikseongwan, which symbolizes imperial status.

“The art of the Joseon royal court was inherently conservative,” explained Bae Won-jung, curator of the exhibit. “However, the proclamation had a major impact on the art of the royal court. To convey the newly elevated status, the attire and emblems depicted in royal portraits and documentary paintings of court ceremonies had to be updated.”

Moreover, since Emperor Gojong attempted to strengthen his imperial status amid the political turmoil of the Korean Empire, art of the royal court from this period was no longer regarded as simple decorations. According to Bae, more Western realism and Japanese decorativeness can be seen in royal court artworks from the Korean Empire, in accordance with Emperor Gojong’s emphasis on modernization. 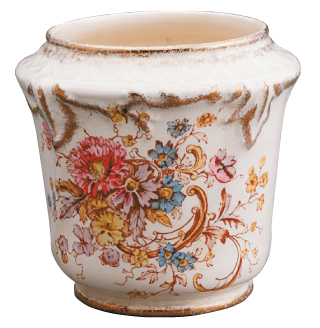 A porcelain jar with a floral design imported from England to be used by the royal court around the end of 19th century. [MMCA]

For example, in the painting “Buddhist Deities” (1907), a group of Buddhist guardian deities, known as sinjung, are featured. Commonly, sinjung are depicted wearing the garments of generals, but in this painting, some are wearing military uniforms and the caps of the imperial army. One guardian deity specifically, is wearing a uniform that recalls a Korean soldier’s uniform during the Korean Empire, with a top that has Korean Empire’s signature flower design on it and shoulder epaulettes adorned with a taegeuk mark.

“We can see that Buddhist painters during the Korean Empire also attempted to pursue innovation and depart from traditional ways of painting while reflecting their hopes that the modern military could protect the Korean Empire,” explained Bae. 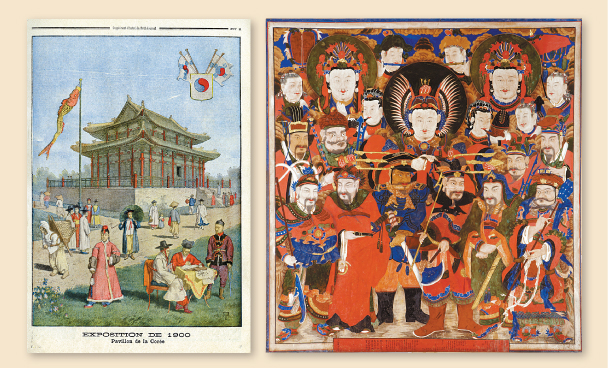 This first section also exhibits the grand “Cranes and Peaches” (1902) painting, which measures 700 centimeters (23 feet) wide and 270 centimeters high. It is a 12-panel folding screen that uses bright golds to depict 10 cranes, a rare size and style for traditional Joseon art.

“The year 1902 was an important year for the Korean Empire,” said Bae, “It marked 40 years of the king’s reign, his 50th birthday and more.”

The work has been part of the collection of the Honolulu Museum of Art since 1927, after ending up in the hands of Yamanaka & Company, a Japanese antique dealer, like many other smuggled Korean cultural properties.

“The painting was exhibited 10 years ago at the National Museum of Korea and after this exhibition, the painting won’t leave the Honolulu Museum of Art for another decade or so,” said Bae.

The exhibition kicked off at the MMCA Deoksugung on Nov. 15 and will run through to Feb. 6 next year. Tickets cost 3,000 won ($2.66) for adults. The museum is open everyday except Mondays from 10 a.m. to 7 p.m. The museum is open until 9 p.m. on Wednesdays and Saturdays. For more information, visit www.mmca.go.kr.