KTX jumps rails at 103 miles per hour, injures a dozen

KTX jumps rails at 103 miles per hour, injures a dozen 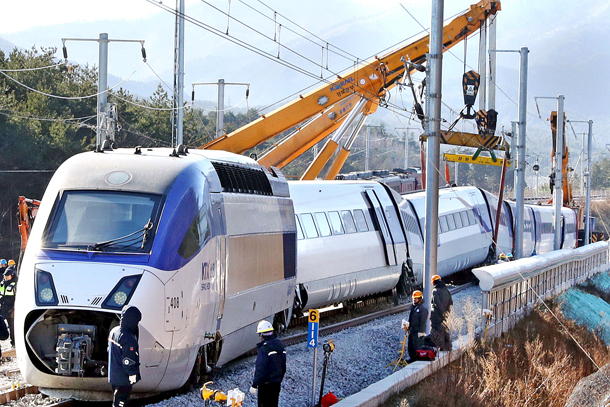 The accident occurred at a juncture where a single track leading to Seoul diverges into two separate tracks headed to Gangneung and South Gangneung stations.

A faulty signal did not properly convey that the tracks had not been switched yet, said Oh Young-sik, CEO of the train’s public operator, the Korea Railroad Corporation (Korail).

Saying that Korail had “lost the trust of the people,” Kim vowed that the government would take appropriate measures with regards to the company’s management, a statement some analysts say could mean the ministry intends to sack Oh – a former ruling party lawmaker – as Korail CEO.

The political opposition, headed by the Liberty Korea Party (LKP), used the accident to criticize the current administration. An LKP spokesman, Song Hee-gyoung, on Saturday said that over a third of Korail’s top management are political appointees linked to the ruling Democratic Party (DP), who she claimed have “little experience or understanding of railway operations.”

Another LKP lawmaker, Hong Chul-ho, cited a Korail report that showed there have been 661 train-related accidents between 2013 and last July, with 109 of those accidents involving KTX bullet trains. Among the 51 accidents that occurred this year, 22 of them, 43.1 percent, were caused by mechanical errors that ranged from outdated infrastructure to breakdowns.