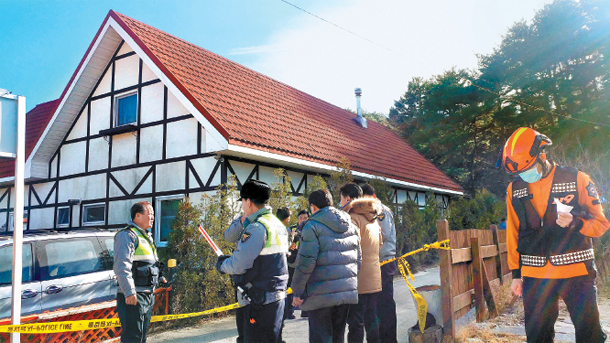 Police officers and firefighters examine a pension and its premises in Gangneung, Gangwon, on Tuesday where three high school seniors were found dead and seven unconscious. The 10 male students were on a trip following the completion of their national college entrance examinations. [YONHAP]

Three high school seniors were found dead and seven others unconscious at a pension in Gangneung, Gangwon, on Tuesday.

According to the Gangwon Fire Headquarters, the students checked in to the pension around 4 p.m. on Monday. The pension owner found the students unconscious at 1:12 p.m. on Tuesday and immediately called 119. Some students were covered in vomit while others were foaming at the mouth.

The students were rushed to nearby hospitals. As of press time, three had died while the other seven were in critical condition. Officials warned that the number of fatalities could rise. Hospital officials confirmed that the cause of death was carbon monoxide poisoning.

According to fire department officials, there was a high level of carbon monoxide in the living room and other rooms of the pension. The police later reported that the two-story pension’s heating system was built to make sure that carbon monoxide escaped through boiler pipes. But investigators found a faulty boiler exhaust pipe near the veranda of the pension.

“If [one] neglects to clean the pipes on a regular basis, there is a chance that a part of the pipe that connects it to the others will rust,” said a police officer. “There is a possibility that the gas could have leaked through a rusted part.”

The students, all of whom are male, were from Daesung High School in Eunpyeong District, northern Seoul. They were on a trip following the completion of their college scholastic ability tests in November.

The reservations for the trip were made with their parent’s consent.

The fire department added that suicide was unlikely as there were no charcoal briquettes or any other materials that could suggest suicide at the scene of the accident. “The fact that the parents of the students made the reservation rather than the students themselves also makes it unlikely that the cause of death would be suicide,” said a fire fighter. Police and fire department officials are collecting witness statements from the pension owner and nearby guests to pinpoint the exact cause of the tragedy.

“We are treating this as an accident, not a suicide or a murder,” Lee Jin-ho, chief of the Gangneung Fire Station, told reporters on the scene on Tuesday.

President Moon Jae-in has sent condolences to the victims’ families and has ordered accommodations to be arranged for the relatives traveling to be near their injured loved ones. He personally ordered Education Minister Yoo Eun-hae to oversee the investigation. Upon his order, Yoo took a train to Gangneung.