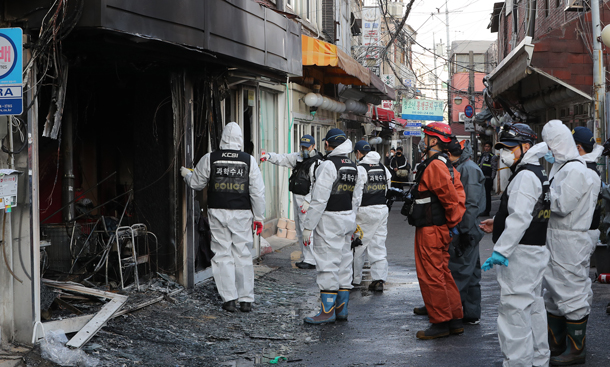 Forensic investigators from the fire department and the police conduct a joint investigation on Sunday to find out the cause of fire at the brothel in Cheonho-dong, eastern Seoul, where two women died in a fire on Saturday. [NEWS1]

The death of women Saturday after a fire blazed through a brothel in eastern Seoul is raising concerns over the safety of workers in Korea’s vast illegal prostitution industry.

According to the Seoul Gangdong Police Precinct on Sunday, the fire occurred at around 11:04 a.m. in a dilapidated two-story building in Cheonho-dong, where dozens of brothels operate in a tightly-packed red light district.

Two sex workers sleeping upstairs following their late-night shifts apparently died after inhaling smoke produced by the flames. Four other women on the bottom floor, where the brothel was located, also suffered injuries.

One of the deceased women is believed to have been the brothel’s 50 year-old owner. She detected the fire and alerted the other victims, but was unable to escape the flames herself.

Though the fire was put out by firefighters in only 16 minutes, firefighters believe the run-down state of the building and a complete absence of safety equipment like sprinklers or fire extinguishers may have resulted in the deaths.

Prostitution is illegal in Korea, but remains rampant across the country. Many prostitution rings operate clandestinely in commercial and residential buildings in many neighborhoods, as well as compact red-light districts tacitly disregarded by authorities.

A total of 22 red-light districts operate across the country, according to police data from September.

Analysts say sex workers are particularly susceptible to accidents as well as abuse and violence because there is no legal oversight of their workplace.

This recent incident harkens back to two major fires that occurred at a well-known red light district in Gunsan, North Jeolla, in 2000 and 2002. These fires ended in five and 15 deaths, respectively.

Almost all the fatalities in those incidents were female sex workers. Most of them were also victims of illegal human trafficking that were deliberately overlooked by corrupt local authorities, according to a police investigation at the time.

But those cases served to bring the practice to the public’s attention, building momentum that eventually led to the passage of a special law on prostitution in 2004.

Under the new law, punishments were strengthened for both solicitors and suppliers of prostitution, particularly when related to sex trafficking. An unprecedented crackdown by authorities followed suit that greatly reduced the number of brothels in Korea’s red light district.

Critics, however, say that the law did little to stamp out prostitution in Korea and instead encouraged it to go underground, where it continued to enjoy immense patronage. According to Havocscope, a U.S.-based website that analyzes black markets across the globe, Korea’s $12 billion sex industry is the sixth largest in the world.

The sheer size of the industry and the myriad ways sex is sold makes cracking down a Sisyphean task for authorities. A police report from 2016 found that the 1,809 prostitution cases that the police investigated nationwide in 2015 were only a small fraction of the total number.