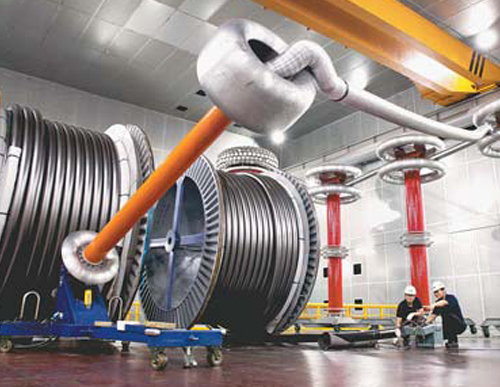 In September last year, LS Group hosted the LS T-Fair, an event sharing the research and development achievements of the group, at LS Tower in Anyang, Gyeonggi. LS Group celebrated its 14th anniversary with T-Fair to strengthen its technological competitiveness and spread its research culture at the group level.

More than 400 researchers, including LS Group Chairman Koo Ja-yeol, the chairman of LS Cable & System, the chief executives of each subsidiary and the chief technology officer, attended the meeting and shared outstanding R&D achievements of the year.

LS Cable exhibited a system that manages information such as real-time location, inventory and theft by applying the Internet of Things to the production of products. LS Industrial Systems (LSIS) provided a cloud system that monitors real-time photovoltaics, employee self-service usage and product status while LS Mtron exhibited technologies such as self-driving tractors, agriculture drills and other smart agricultural solutions.

LS Group has taken R&D speed-up and digital transformation as the group’s R&D and future preparation strategies. It has become one of the key players in the field of power infrastructure, smart energy and digital conversion. LS Cable has developed various high-tech cables to cope with this trend of using energy and information more diversely. LS Cable has succeeded in localizing high-voltage, direct current transmission (HVDC) cables first, exporting HVDC submarine cables to the Danish Electric Power Authority in 2013 and obtaining Korea’s first land HVDC cable business in 2016.

LSIS is accelerating next-generation power grids and micro grids, which supply power to a small area with fusion and smart solutions. It applies ICT to technology in the power and automation field.

LSIS has started commercial development by constructing a mega-wattage-based solar power plant that is connected to ESS in Hokkaido, Japan, and Busan, Korea. Moreover, it has been acknowledged for its technological prowess in the mega-solar market in Japan, such as the Mito Solar Park in Japan in 2015 and the solar power plant in Hanamizuki in September of last year. The LS-Nikko Copper smelter has decided to introduce a smart factory system that automates the process by connecting all processes to the Onsan smelter through communication. This is the second application of smart factory technology at a smelter after Germany’s Aurubis smelter.

In addition, LS Mtron, which is in charge of the industrial machinery and advanced parts business, has developed tractors equipped with eco-friendly engines that exceed environmental regulations in Europe and the United States. The eco-friendly LPG company E1 is based overseas in cities such as Singapore and Houston, strengthening overseas business capabilities by expanding trading.