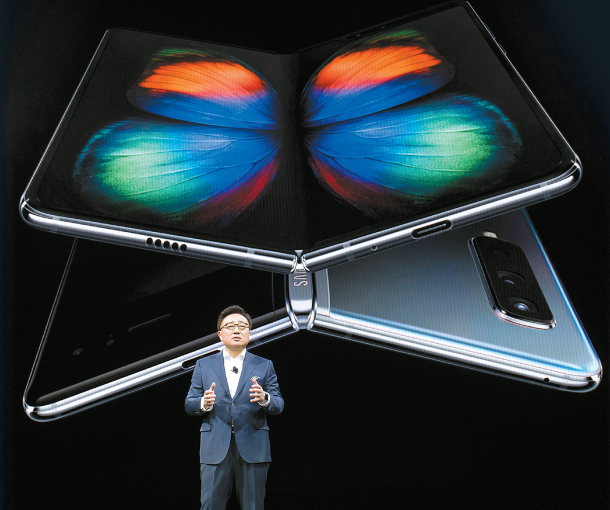 Samsung unveils its foldable smartphone, the Galaxy Fold, at an unpacked event on Feb. 20 at the Bill Graham Civic Auditorium. [SAMSUNG ELECTRONICS]

On Feb 20, Samsung introduced the Galaxy Fold, kicking off a new era in smartphones at the “Samsung Galaxy Unpack 2019” event at the Bill Graham Civic Auditorium in San Francisco.

The Galaxy Fold is equipped with the world first 7.3-inch Infinite Flex Display and a foldable screen with a 4.6-inch cover display, providing powerful multitasking functions such as split screens that allow users to open multiple applications simultaneously.

“[The] Galaxy Fold breaks new ground, not just because it defines categories but because it answers to skeptics who said everything possible has been done; … that smartphones are a mature technology and a saturated market — we are here to prove them wrong,” said Samsung President Koh Dong-jin, head of the company’s IT and mobile and communications division.

Samsung Electronics developed a new composite polymer material to create the folding screen, coming up with a display that is roughly 50 percent thinner than conventional smartphones.

The device provides a revolutionary experience as it can be used as both a tablet and a smartphone, adapts the newly developed hinge technology to tolerate external shocks and stays flat and thin despite being opened and closed numerous times.

In addition, Samsung completely redesigned the smartphone by installing a fingerprint sensor where users’ thumbs would naturally touch the screen in order to easily unlock smartphones and properly balanced the battery and smartphone to ensure safety. 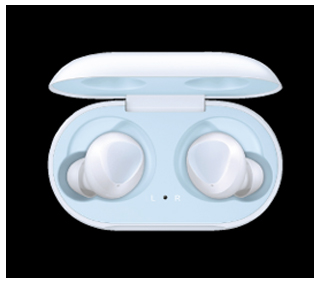 The Galaxy Buds wireless earphones were also unboxed alongside the S10 and Fold. [SAMSUNG ELECTRONICS]

The Galaxy Fold provides a completely new experience as multiple applications can run at the same time on the much wider screen, allowing users to comfortably do two or three different tasks at once. The device also supports App Connectivity Usability, which automatically displays the applications that users are using on the cover display and internal display seamlessly when the phone is opened or closed.

Meanwhile, Samsung Electronics is planned to collaborate with Google and Android to showcase various applications and services that are optimized for the Fold.

The new phone not only provides new usability but also the powerful performance of a Galaxy smartphone. It has 12 gigabytes of RAM so that users can smoothly use multiple applications at the same time.

In addition, the dual-battery system ensures plenty of power, and the device can even be used to charge other smartphones or Galaxy wearables through wireless charging.

The Galaxy Fold is equipped with a dynamic Amoled display and stereo speakers from Harman Kardon’s premium audio brand AKG, providing an ultimate entertainment experience with vivid color and sound.

The device can also capture important memories, whether folded or unfolded. It is equipped with a total of six cameras of between 8 and 16 megapixels: one on the front cover, two inside and three on the back.

In addition, the Galaxy Fold supports various applications that allow it to work in unison with PCs, such as Samsung DeX, Bixby, Samsung Knox, Samsung Pay and Samsung Health.

The Galaxy Fold will go on sale globally in the second quarter of this year. 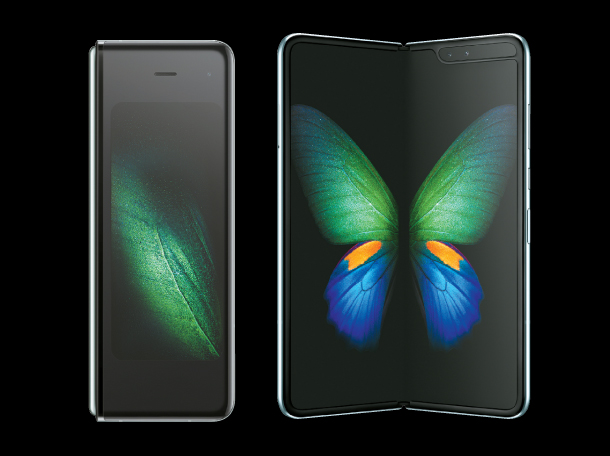 Samsung Electronics unveiled the next generation of its Galaxy smartphone series, the Galaxy S10, on Feb. 20 in San Francisco.
At the event, Samsung unboxed the Galaxy S10 lineup, the Galaxy Fold and wearable devices such as the Galaxy Watch Active, Galaxy Fit and Galaxy Buds.

Samsung launched the Galaxy S10 series in a wide range of options; the Galaxy S10+, Galaxy S10, Galaxy S10e, and Galaxy S10 5G.
The Galaxy S10 is equipped with an Infinity-O Display design that fills the entire front of the smartphone except for the camera and a Dynamic Amoled that provides a true full-screen experience. The Dynamic Amoled display has a contrast ratio of 2 million-to-1, providing sophisticated color even in bright sunlight.

The 16-megapixel, 123-degree ultra-wide angle camera and 12-megapixel super-speed dual pixel camera are equipped with a Dual Aperture of F1.5 and F2.4. The Galaxy S10 and Galaxy S10+ have optical 2x zoom and a 12-megapixel telephoto camera so that users can take clear photos from various angles.

Samsung unboxed the Galaxy S10, with a bigger screen, more cameras and more functions than ever before. [SAMSUNG ELECTRONICS]

The Galaxy S10 is premium hardware with built-in artificial intelligence. It supports the wireless battery-sharing feature that allows users to use the S10 as a wireless charging pad. Also, users are able to learn smartphone usage patterns and optimize battery life and application execution speed by applying AI-based performance optimization software to the battery, CPU and RAM of the Galaxy S10.

The Galaxy S10 comes with Intelligent Wi-Fi, which provides a seamless Wi-Fi network connection. It also offers Bixby Routines, which recommend personalized smartphone settings according to users’ lifestyles. In addition, it supports the next generation Wi-Fi 6 specification that can use Wi-Fi up to 4 times faster even with many connected devices.

It supports the LTE with download speeds of 2.0 Gigabits per second, the first smartphone to do so.

The Galaxy S10 will also come with 5G wireless communication that supports up to 20 times faster transmission speeds than the existing LTE, ultra-low latency and ultra-connectivity. The 5G version will be equipped with a 6.7-inch Infiniti-O display, the largest of the Galaxy S series, and Samsung’s first 3-D depth camera to detect depth using infrared technology.

In addition, a large capacity battery of 4,500 ampere hours and rapid charging technology enable users to enjoy the superiority of next generation 5G wireless communication.

The Galaxy S10 will be released around the world on March 8. Customers who have preordered the Galaxy S10 will also receive wireless earphones, Galaxy Buds. The Galaxy S10 is available in six colors: Prism Black, Prism White, Prism Green, Prism Blue, Canary Yellow and Flamingo Pink.

In addition, the Galaxy S10 + is available in Ceramic White and Ceramic Black in addition to the other six colors.