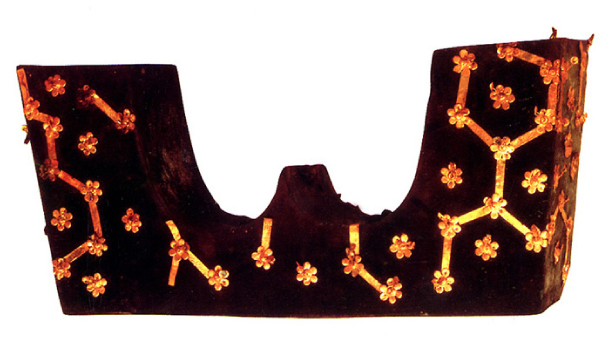 
This ornamental prop for the feet of the dead king was excavated from the Tomb of King Muryeong of Baekje in Gongju, South Chungcheong.

A smaller ornamental support for the feet of the dead queen was also discovered together with the king’s.

It is an inverted trapezoid wooden block with a deep W-shape cut in the midsection for the feet of the corpse.

The front is painted in black.

Its front and rear are decorated with many turtleback patterns depicted in long golden plates, but some of the patterns are broken away.

Six-pedaled flowers are placed on the crossing points of the golden plates or in the middle of each golden plate.

The one belonging to the queen has a 4-millimeter-thick golden frame around its edge and the front is painted in red.

It is decorated with lotus blossoms and cloud patterns.

It has traces of silk that used to be spread on the inside of the W-shaped cut.

This tomb was built for King Muryeong, the 25th king of the Baekje Dynasty who reigned from 501 to 522, and also his queen.

It’s one of the most well-known royal tombs because it’s one of the rare tombs that was built with bricks, and also a great amount of burial goods - 2,906 pieces of remains ranging over 108 categories - were excavated from it.

They have been regarded as important sources for studying Baekje, particularly the culture and customs of the ancient kingdom.

Among them, jiseok, a slab of stone inscribed with the deceased’s date of birth and death together with his achievements, reveals the exact owner of the tomb and the exact date of construction.