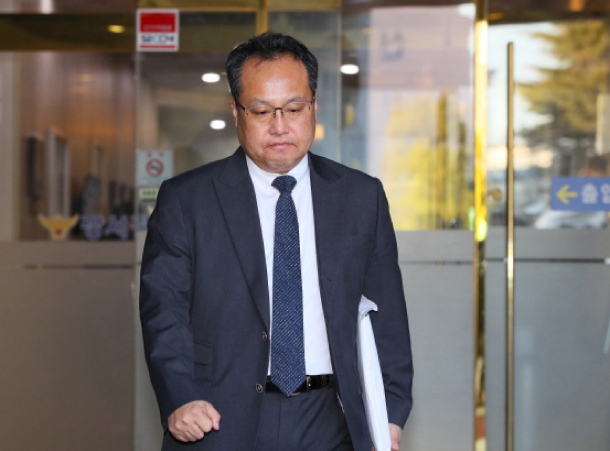 Song Myeong-bin, an executive of a tech company based in Seoul, leapt to his death early Wednesday morning, just hours before a court hearing on his arrest over his alleged physical abuse of an employee.

Song, 49, the CEO of Marker Group, was facing arrest over accusations that he habitually beat and threatened an employee and violated the Labor Standards Act.

He was found lying motionless on a flower bed near his apartment in Goyang, Gyeonggi, at around 4:40 a.m. by a passing pedestrian, who immediately called 119. An ambulance soon arrived at the scene and pronounced Song dead.

In Song’s apartment police found a six-page suicide note, which contained an apology to his family and a proclamation that he would protest the false accusation against him via his death. The note was written in jagged handwriting that suggests Song was in a beleaguered state of mind before his apparent suicide, police said.

Further details of the note will not be released to the public unless Song’s family consents, police added.

A prominent figure in Korea’s tech industry, Song was best known for pioneering a technology which he called a “digital aging system.” These programs erase data uploaded by users like photos or posts after a period of time. In 2015, he published a book titled “The Right to be Forgotten,” shedding light on the importance of individual privacy in the age of digital oversharing.

Song’s reputation collapsed last November when an employee surnamed Yang told the police that Song had frequently physically abused him with a variety of objects, including a steel pipe, wooden stick and a shoehorn starting in March 2016.

Yang submitted photos of bruises on his body to the police that he claimed were the result of Song’s physical abuse. One video from Yang broadcast by the local media showed Song repeatedly punching him in an office space, which sparked a public outcry over workplace abuse by superiors, a major issue in Korea.

The allegations generated controversy about the frequent nature of such violence in the country’s tech industry. Earlier that same month, another tech company CEO - Wedisk’s owner Yang Jin-ho - was found to have abused and harassed his employees through a variety of scandalous methods.

While Song apologized to his employee Yang for the physical and verbal abuse - which he admitted to - he also claimed the violence was provoked by his discovery that Yang had embezzled company funds and incompetently managed its products. Yang had “overall led the company into a difficult time,” Song said before a police investigation into the abuses began in January.

Song said that Yang received 90 million won ($80,643) as his yearly salary and an annual bonus of some 15 to 20 million won, but refused to resign when he and the company’s board of directors had asked him to do so, trying instead to destroy evidence of his embezzlement and other malpractices.

The reports of abuse Yang submitted to the police were meant to cover up these misdeeds, Song said.

Nonetheless, police and prosecutors filed for Song’s arrest with a local court Monday based on multiple counts of violence and threats. His sudden death on Wednesday left investigators flustered, with a press officer saying there was no pressure applied during the probe into the case that could have pushed him toward such an extreme decision. The case will likely be closed in the near future without any charges filed, police added.