At 103, Kim Byung-ki still has something to say: In latest exhibit, the veteran artist shows off colorful additions to body of work

At 103, Kim Byung-ki still has something to say: In latest exhibit, the veteran artist shows off colorful additions to body of work 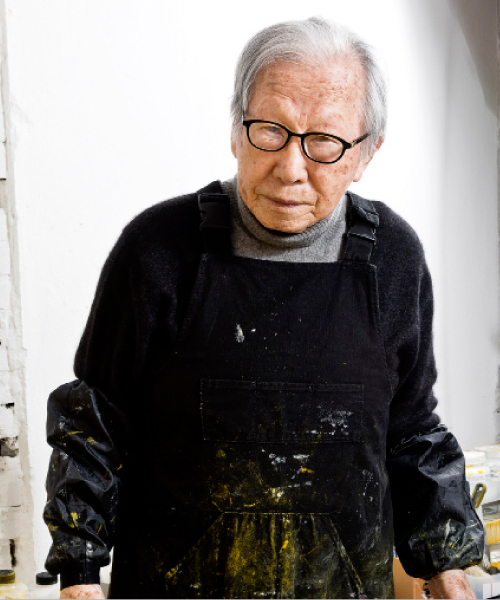 Kim Byung-ki, who specializes in abstract art, is the oldest active artist in Korea. He turned 103 on Wednesday. [GANA ART CENTER]

Kim Byung-ki has enjoyed a successful career as one of Korea’s first-generation abstract artists.

Known for adding an eastern touch to postmodern art, Kim has held solo exhibitions both locally and internationally, taught at prestigious universities and served as the commissioner of the 8th Sao Paulo Biennale.

The artist is now displaying some of his latest works in a new solo exhibition being held at the Gana Art Center in Jongno District, central Seoul.

Titled “Here and Now” - a phrase taken from French philosopher Jean-Francois Lyotard’s “The Postmodern Condition” (1979) - the exhibition showcases around 20 works in total.

The pieces showcased in this exhibition freely cross the boundaries of abstract and figurative, as straight lines and geometric figures intersect defined images like persimmons. Re-occurring motifs are mountains, trees and other aspects of Korea’s landscape that the painter observes from his studio window.

Kim dropped by the Gana Art Center to speak with local press on Wednesday - both the day of the exhibition’s opening and his 103rd birthday.

His most recent piece “Mountain East - Epic,” a yellow oil painting crisscrossed with white and black line, is a reflection of both Korea’s beauty and the pains from division. 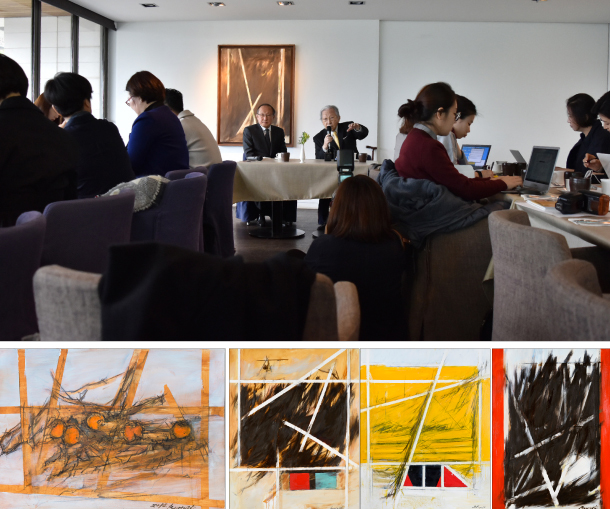 “The [intersecting lines] reminded me of Korea,” Kim said, dressed in a suit with a cane in hand. The veteran painter moved smoothly across the two-story gallery space, expressing his thoughts with more vigor than people half his age.

“Korea is divided into provinces, into North and South… The yellow represents dusk. The dusk comes down onto a hard roof. There is a persimmon tree [I can see from my window] and a pine tree. These trees are actually very emotional. You can also see mountains.”

Born in Pyongyang in 1916 during the Japanese colonial era, Kim has seen Korea mature from pockets of farmlands into busy urban spaces.

Although he lived several decades in the United States, to the point that he was almost forgotten in the local art scene until late 1980’s, the artist incorporates many Korean elements into his works, proudly announcing “I’ve never forgotten that I am Korean.”

Kim’s paintings made over the last year are notably more colorful than works from three years prior. Now they’re shaded in vibrant yellow and red, whereas beiges and pale blues were common before.

“I’ve developed a greed for color,” Kim admitted, responding to a comment about his evolving color scheme. “I’ll be presenting a lot of colorful pieces from now on… although I’m a bit apologetic for saying ‘from now’ given my age.”

For Kim, however, age really does seem like nothing but a number. The title of his exhibition “Here and Now” is a reference to the feeling of infinite potential and freedom that Kim gets from seeing a blank canvas.

“In art, the answer to ‘1+1’ is not 2. It is a world where the answer could be 3, 5 or anything,” Kim said. “It is an art of complexity, a creative integration. Two is a compromise. The worst thing in art is compromise.”

The painter closed the press briefing with a call to arms against modern ills inflicting the art world.

“I think falsehoods tend to arise from conceptual art. I get that concepts are changing, but what remains of them? Toilets and TV sets. I think drawing is fundamental. In some regards, it is everlasting. I also want to talk about the importance of [drawing] the things that we can see, even though I’m an abstract artist, ”

“The problems in the future are your problems, your responsibility. But don’t forget that there’s an elderly person paying close attention to what you do.”