Stanford professor on how Korean start-ups can thrive

Stanford professor on how Korean start-ups can thrive 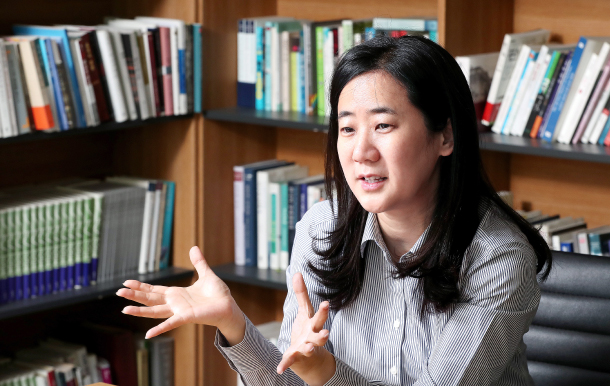 Stanford University Professor Lee Jin-hyung has opened up a new frontier in how brain disease is diagnosed. She invented a technology that allows people to look inside the nervous system of the brain. She is attracting a tremendous amount of investment into her newly-established start-up and said that the goal of her research is to diagnose and cure brain disease.

After graduating from Seoul National University with a degree in electrical engineering, she went to Stanford University to study abroad. There, she became the first female Korean professor of bioengineering at Stanford. Based on her research, she established a start-up related to brain disease in Silicon Valley. At the end of 2018, she founded a Korean corporation and received 17 billion won ($14.92 million) worth of investment from KB Investment and SK Holdings.

Instead of resting on her laurels, she emphasized that there are more problems in the world than smart people to solve them. She added that start-ups must encourage people to solve social problems.

This is an edited excerpt from the JoongAng Ilbo’s interview with Lee when she was in Korea to visit her business.

She said that the purpose of her research and start-up is to diagnose and cure brain disease by handling brain circuits like an electronic circuit in a smartphone.

Q. Handling the brain as if handling an electronic circuit — can you explain what this means?

A. What do we do when our mobile phones do not work? Experts look carefully at the circuit, test this and that, decide what is wrong and fix it. What about brain disease? Mostly doctors only consult the patient. The doctor does not open up the circuit but merely looks at the mobile phone and talks. That is why the doctor is unable to diagnose what is accurately wrong and fix it. Rather than consultation, doctors need to diagnose and cure the disease by observing how the nervous system of the brain actually works.

First of all, the functions of each kind of brain cell should be identified. At the same time, the influence of every cell on the brain network as a whole should be known as well. Actually, in the past, each function of a brain cell and the whole movement of the brain were observed separately. The core is to understand the two parts in fusion. That is what I researched and put this to practical use.

Is this observation in the process of being applied to actual brain disease?

When it comes to epilepsy, the patients can know what part of their brain is abnormal.

It seems like you found a relationship between epilepsy and a certain part of the brain.

The causes and symptoms of epilepsy are all different. Discovering what part of the brain is problematic for this patient and that patient can offer tailored treatment for each. Now we are in the stage where abnormal parts in different patients can be identified.

You were a student who studied electrical engineering and became a brain scientist.

I have been interested in the brain for a long time. I used to sleep after trying my best to solve a question during high school, and the way to solve the question sometimes suddenly popped up in my mind the next morning, so I got curious as to how the brain learns.

Why did you change to brain science?

When I did my doctoral degree at Stanford, I studied biomedical engineering and improved MRI imaging technology. It is also one of the fields under electrical engineering. When I was about to finish my doctorate, my grandmother fell due to a stroke, and that was the turning point. All she could get was rehabilitation treatment and she just had to wait until it was cured.

I was so frustrated as to why nothing could be done. Then, I went to this seminar related to brain science and suddenly an idea came up. It was related to the field that I have researched. I submitted a proposal to the U.S. government, and research funds were offered.

You established a start-up called LVIS.

I am naturally drawn to solving questions. Ending my research would be just giving the responsibility of [continuing to] apply [this research] to others. Now, I am doing this on my own.

It is known that Stanford is like heaven for start-ups.

There is almost no professor around me who has not started a business.

Korea is different. People tend to be critical of such professors, saying that the professor is paid twice by the school and by the start-up. Some also say that professors give lectures less than before since they are busy working on their companies, so other professors have to teach instead.

Culture in the organization is important. A professor is a leader of knowledge in a certain field. A professor opening up a business is a very fast way to make use of the knowledge in society. In Stanford, even students are fully aware of that matter. The school invests in the professor’s business and earns money.

By employing more professors through that process, the burden that goes to other professors can be reduced as well. Yet, for these kinds of incidents to happen and make people change their views, it will take time.

The institutions for start-ups are laid out. For instance, for a few hours per week, [professors] are allowed to do jobs other than school work.

However, the school does not actively encourage them to start a business. They should do their job on their own. Running a company is fun but is also tough.

You established a corporation in Korea.

Korea has a number of talented people. It is possible to directly hire them, or they can cooperate with great doctors. They can even help patients in Korea by collaborating with doctors.

I heard that it is hard to begin a start-up in Korea.

The thing is, opening a savings account for the company required a pile of documents. The company credit cards that the bank provided, the two of them, had a 2 million won ($1,759) limit. The bank said [purchases] over 2 million won were not permitted.

Have you told them that it is a start-up that received investments of 18 billion won?

I just asked to extend the limit, but they kept on saying that it is not allowed for newly-established corporate bodies. It is not flexible.
The United States lets us do anything we want to do. Rather than judging whether it is good or bad, I just felt that Korea is different.

Many start-ups have difficulties due to the 52-hour workweek.

It is close to a miracle if a start-up succeeds. With a small labor force, a lot of work should be done. But it is hard to fire an employee who does not work.

The labor law lacks flexibility. The 52-hour-workweek is the same. Rather than that, isn’t it right to have a system where hard-working people can be rewarded more? Letting everyone do the same job is using the labor force inefficiently.

What about the institutions that support start-ups?

In order to get high-quality human resources, high wages should be given. But these kinds of start-ups are not supported enough. Generally, people earning below a certain wage are the ones who get support. It is not helping the “good” start-ups.
Other than the labor law, aren’t there other restrictions as well?

After coming to Korea and having conversation with doctors, I found out that it is hard for doctors to apply new technology due to institutions. As a result, Korean patients are likely to lose the chance to enjoy the benefits of technology.

Right now, it is all about lifting restrictions in Korea. The president even said he will root out restrictions that hinder progress, but it is not working.

Risk factors should be restricted, but new technology should be introduced as fast as possible. That is the kind of environment where start-ups are created and high-added value industry is developed.

Competitive talents feel attracted to that type of society. If there are many restrictions and it is complicated to run a start-up, who would come voluntarily?