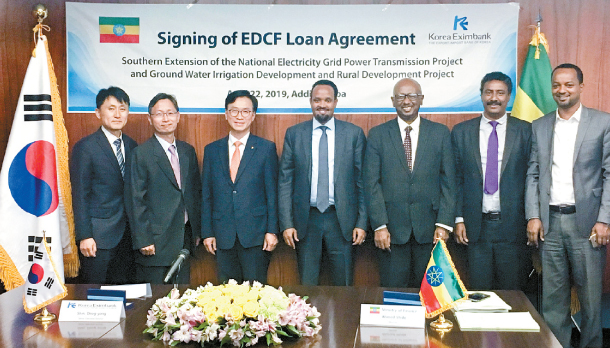 The Economic Development Cooperation Fund (EDCF) is aiding Ethiopia’s economic development by establishing a power network in the south of the country and developing ground water irrigation.

On Feb. 23, The Export-Import Bank of Korea (EXIM) announced that it has signed a loan grant agreement to provide $264 million in foreign economic cooperation funds to the Ethiopian government for the national electricity grid power in southern Ethiopia, ground water irrigation and rural development.

On March 22, Shin Deog-yong, a senior executive director of EXIM, met with Ahmed Shide, Ethiopian minister of finance, to sign the loan agreement.

Located in the northeastern part of Africa, Ethiopia has been developing at a fast pace with an annual economic growth rate surpassing 8 percent for the past five years.

However, Ethiopia has suffered due to the poor condition of its power network which severely hampers the construction of factories and industrial complexes. Water is also an issue, as river water in the country is not safe to drink without treatment.

In light of this, EXIM decided to sign a loan grant agreement to support a total of $170 million in EDCF funding for Ethiopia’s national power grid expansion project to build national grid lines and construct a substation in southern Ethiopia.

It is the largest unilateral EDCF fund ever granted to Ethiopia.

Once the project is complete, it is expected to contribute greatly to the local power and economic development by supplying stable electricity to nearby plants and industrial complexes.

In addition, the Groundwater Irrigation and Rural Development Project, which will be supported with $94 million in funds, includes groundwater wells and irrigation development projects in Oromia, Ethiopia, to improve the agricultural value chain.

It is expected to create sanitary drinking water and help educate Ethiopians on the Korean approach to rural development.

“Our support for the infrastructure of Ethiopia’s national development plan will greatly contribute to the increased partnership between the two countries and the Korean companies’ overseas expansion into Africa,” said Shin at the signing ceremony.