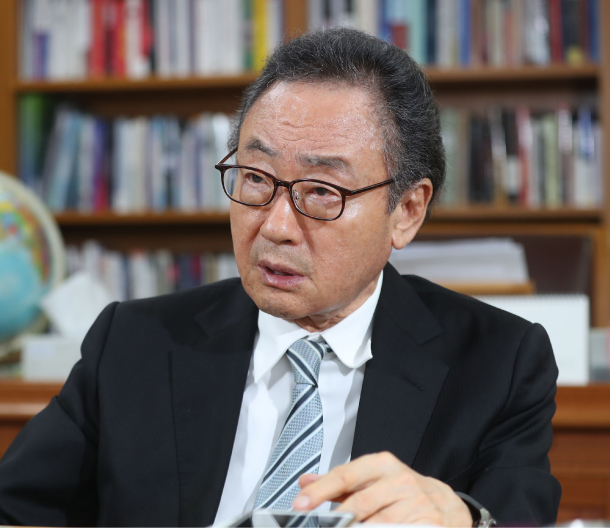 “At the 2019 Osaka G-20 summit, U.S. President [Donald] Trump has to get at least a small political trophy [to show off] and Chinese President Xi Jinping has to maintain his dignity.”

SaKong Il, the chairman emeritus of the Institute for Global Economics, made a guess on what Trump and Xi Jinping have in mind in preparation for their summit. Amid the tense situation between the two countries, he recently published a book “Conversations with Global Economic Leaders and Leading Thinkers of Our Time,” in which he converses with the heads of international organizations and world-renowned scholars. In face of an unstable and unclear global situation, the title of the book is garnering attention.

The JoongAng Sunday met SaKong and heard his analysis of the global economy. First, regarding the U.S.-China trade deal, he emphasized that the big deal between Trump and Xi Jinping is highly unlikely to occur. Neither a rupture nor an agreement would take place. Rather, the ending would be unclear. SaKong also said that the trade war between the two powers is part of a way to gain supremacy over one another and the conflict will last 10 to 20 years from now on. In order to deal with this diplomatic crisis, he said that Korea should continue to have diplomatic relationships based on consistent principles. He called for Korea to diversify and make multiple layers of both economic and trade relationships.

In the 1980s, SaKong Il led Korea’s economic development by serving as the minister of finance and the senior secretary to the president for economic affairs. Later, he founded the Institute for Global Economics in 1993 and, until 2018, had served as its chairman emeritus.

Q. The spectrum of people who appear in your book is very wide.

A. Not only the current head of major international organizations, including the International Monetary Fund (IMF) and World Trade Organization (WTO), but also world-renowned scholars including Jacques Attali, Guy Sorman and Francis Fukuyama were included in the book as well.

Martin Feldstein, chair professor at Harvard University, passed away right after your book was released.

Martie is a scholar who has been close to me for over 30 years, since the late 1980s, when I was the minister of finance. Actually, at the Institute for Global Economics, he was supposed to deliver a lecture in the morning on March 26. Then, suddenly I was told that he was unable to come due to health issues. It is truly sad. Martie was the scholar of scholars, who was admired and gained trust among fellow economists in the United States.

In your book, the viewpoint of Feldstein and Lawrence Summers are very different.

Which part should we pay attention to during the conversation with Feldstein?

He emphasizes that macroeconomic statistics or productivity index do not reflect reality enough. That is, technology changes so fast that the statistics in relation to the welfare of consumers or price and productivity do not sufficiently show the change.

The heads of international organizations and central banks of major countries are extremely careful in what they say, so how did they approve of a conversation that will be publicly reported in the media?

Christine Lagarde, chairwoman of the IMF; Mario Draghi, president of the European Central Bank (ECB); and Haruhiko Kuroda, governor of the Bank of Japan (BOJ) are facing important matters right now, so despite strong opposition from the advisers, they trusted me and agreed to have a conversation with me. This is all thanks to the trust that we have built for a long time.

You also talked to Roberto Azevêdo, current director general of the WTO. How will the trade war between the United States and China proceed?

At the G-20 summit held in Osaka, Japan, from June 28 to 29, it is highly likely that U.S. President Donald Trump and Chinese President Xi Jinping will meet. However, the possibility of a big deal happening is almost zero.

So do you think the deal will fall apart?

No. The two will probably not announce that the negotiations broke down. Like the meeting between Trump and Kim Jong-un held in Hanoi, Vietnam, an ambiguous ending, neither a rupture nor an agreement, could be made. Yet, it is clear that Trump wants to go back to his home country at least with a small political trophy and with short-term achievements due to re-election. Xi Jinping could accept the China’s unique practical negotiation strategy to achieve the long-term goal, known as the Chinese dream. It would end as a negotiation where the both would not end up shaming themselves in and out of their country. A so-called small deal could be made.

How is Trump perceived by scholars?

The vast majority of the intellectuals are displeased with Trump, who attempts to demolish or confuse the order of the free market economy that has been established and continued by the United States since the Second World War. Trump’s policy is oriented around bilateralism instead of multilateralism and he always puts America first, so many do not consider his one-sided policy desirable.

However, intellectuals in the United States seem to be supporting Trump’s pressure on China recently.

The anti-China emotion as known as Chinaphobia has become widespread among leaders and intellectuals, not only in the United States but also in Europe. The current trade conflict between the two countries is a part of a competition to have hegemony over the other, so the conflict will continue for at least 10 to 20 years from now.

In the near future, I do not think that the two will have a war. Regarding the military power, China will not be able to have an all-out war with the United States for a long time. Regional conflicts can take place all the time, so chaos in the international order is unavoidable.

When I meet figures in the United States, they always emphasize that China right now is completely different from Japan in the past. We have to adopt a flexible strategy in both public and private to save face for Xi Jinping and the Chinese people.

When the United States and China are having a conflict, what should a country like Korea do?

The supremacy war between the United States and China will probably take place in a variety of fields and could elevate into conflict. The world order will inevitably be unstable.

Our country, which is a mid-sized, open economy, will clearly be damaged the most. We have to deal with this situation by having diplomatic ties with these two important countries in both national security and economy based on principle.

Furthermore, we need to have a long-term strategy in our international relationship and economic ties.


What do you mean by long-term strategy?

Whether we have an alliance with the United States or have a strategic alliance with China, we need to do it under a consistent principle. An untrustworthy, weaker country without principles has no choice but to succumb to unconditional pressure from a stronger country. Our diplomacy should diversify and have multiple layers with other countries in a similar situation, and our economic trade relations should also diversify.