[Sponsored Report] It’s time to get Georgia on your mind

[Sponsored Report] It’s time to get Georgia on your mind 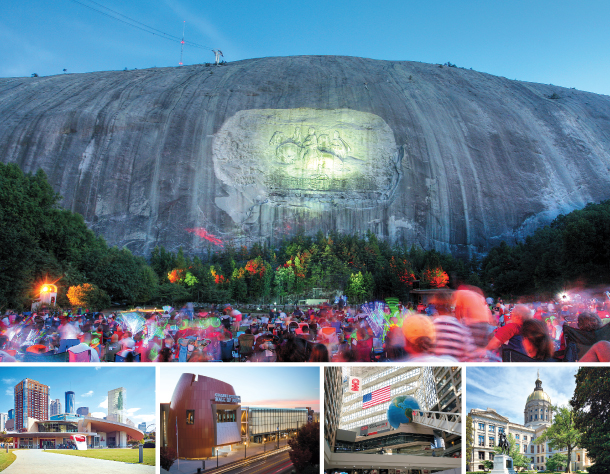 Located in the southeastern region of the United States, Georgia is the 24th largest and eighth most populous of the 50 states.

Georgia is nicknamed the Peach State due to its reputation for producing the highest quality fruit.

Atlanta is a both the state’s capital and largest city, comprising about 60 percent of the entire state population.

The Atlanta metropolitan area is the cultural and economic center of the Southeast and the ninth largest metropolitan area in the United States due to its low taxes, right-to-work law and a regulatory environment limiting government interference.

World of Coca-Cola, Stone Mountain, Georgia Aquarium and the Savannah History District are important tourist attractions in the Atlanta area. The 1996 Summer Olympics was held in Atlanta.

The Port of Savannah, which serves as the largest single-container terminal and the fourth-largest seaport in North America, is located in Georgia. Hartsfield-Jackson Atlanta International Airport is Georgia’s primary commercial airport and is the world’s busiest passenger airport.

Georgia was first founded by James Oglethorpe as 13th British colony in 1733. It was named after King George II of Britain.

Georgia was one of the 13 colonies that fought in the American Revolution by signing the 1776 Declaration of Independence. The State of Georgia’s first constitution was ratified in February 1777. Georgia was the 10th state to ratify the Article of Confederation. In 1829, the Georgia Gold Rush emerged when gold was first discovered in the North Georgia Mountains, leading to a massive influx of white settlers.

In early 1861, Georgia joined the Confederacy and became a stage of activity during the American Civil War, with many important battles taking place across the state. After the war, Georgia rejoined the Union in 1870, the last Confederate State to be restored.

Martin Luther King Jr. emerged as a national leader during the Civil Rights movement and contributed to forming the Southern Christian Leadership Conference in Atlanta in 1947 to offer political leadership for the Civil Rights Movement across the South.

The Sun Belt phenomenon since the 1960s triggered substantial population growth from an influx of people seeking economic opportunities and a warm and sunny climate.

In recent years, Georgia has been ranked as the No. 1 state in the United States to do business in for six consecutive years by the Site Selection and the No. 2 state for infrastructure and global access by Area Development magazine.