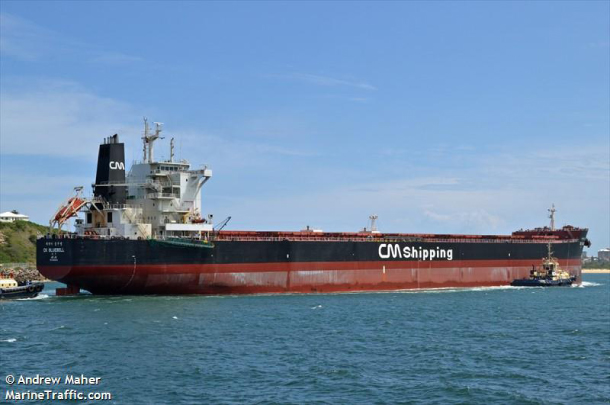 Korean cargo ship CK Bluebell was attacked by pirates in the early hours of Monday morning in waters 100 miles northeast of Singapore. [YONHAP]

A Korean cargo ship was attacked by pirates in the South China Sea on Monday, leaving two injured.

The Ministry of Oceans and Fisheries said that pirates boarded a Korean freighter, CK Bluebell, located 100 miles northeast of Singapore, in the early hours of Monday morning.

The pirates stole $13,300 in cash and the crew’s personal items such as clothes, shoes and mobile phones.

The ministry explained that seven pirates, armed with guns and other weapons, boarded the 44,132-ton cargo ship using a speed boat at 4:25 a.m. They overpowered the crew, stole their belongings and fled the scene within 30 minutes.

The ship’s captain and second officer sustained minor injuries such as bruises during the attack, but no other damages were reported. The vessel has 22 crew members in total, consisting of four Koreans and 18 Indonesians.

According to the Oceans Ministry, the cargo ship continued on its original course immediately after the attack. Data from shipping tracker MarineTraffic indicated that the ship was sailing from Santos, Brazil, to Korea’s western port city of Incheon.

The vessel, owned by Chang Myung Shipping, passed through the Singapore Strait on Sunday. 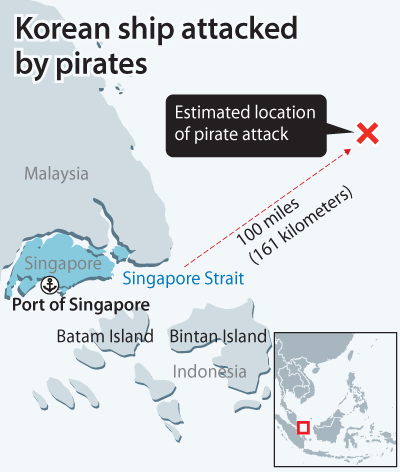 The ministry said it will strengthen monitoring of seven Korean vessels in the region of the attack as well as pirate-related activities in the area. Piracy in the region has been on the decline in recent years, according to a report by the International Chamber of Commerce.

The ministry added that it told shipping companies to notify its vessels to strengthen monitoring of piracy to prevent similar incidents.

A Korean Coast Guard official explained that the agency will start an investigation into the incident when the vessel arrives at the Port of Incheon on July 30.

The official said that the agency has already organized a team to lead the investigation and it will review the ship’s voyage data recorder, akin to the flight recorders used in airplanes, to try and identify the pirates.

It has also told the ship’s crew members to preserve CCTV footage from the time of the incident and details of the location of the vessel where the pirates boarded the ship.

The official explained that such attacks by pirates on Korean vessels are not common and only one similar incident occurred last year.

He said it will place the perpetrators on the Interpol wanted list when they are identified.

The official added that the agency will work with relevant authorities in Indonesia once investigations begin.