[Sponsored Report] Lotte gives back to the community

[Sponsored Report] Lotte gives back to the community 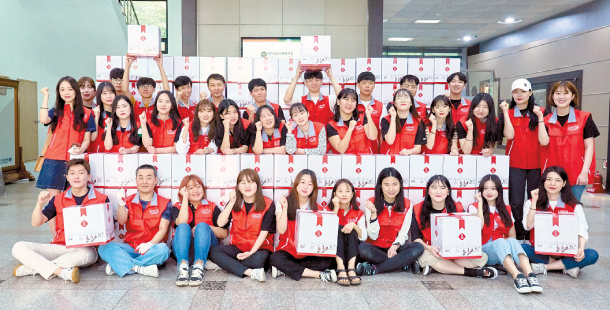 Under the vision of “Lifetime Value Creator,” Lotte Group has actively carried out various social contribution activities to promote sustainable growth over the next 50 years.

Since 2013, Lotte has held the Lotte Pleasure Box Campaign to provide gifts to people who are experiencing financial hardships. Through this campaign, daily necessities - such as sanitary pads, hand creams and nursing care products, as well as braille books - are given to low-income students, unmarried mothers and blind people.

On June 20, the group held the Lotte Pleasure Box Campaign at the International Youth Center in Banghwa-dong, western Seoul, to prepare packages with household items and food for 2,200 elderly people. A total of 2,100 people - including volunteers, Lotte Group employees and university student supporters known as U-Friends - have participated in the campaign to deliver the 46,000 boxes to people in need.

Lotte has also promoted gender equality through a children’s book. On April 9, Lotte co-hosted the “Following Stories and Finding Yourself Children’s Book Forum” with the Ministry of Gender Equality and Family and Childfund Korea at the Mapo Central Library in western Seoul to help children develop gender equality awareness.

The Educational Culture Project for Following Stories and Finding Yourself is designed to reduce stereotypes formed through existing children’s books and to help children cherish their own values irrespective of gender. The group signed a memorandum of understanding (MOU) with the Ministry of Gender Equality and Family and Childfund Korea in December to expand gender equality education by selecting gender equality books for children and adolescents, and establishing gender equality book zones in schools, libraries and bookstores.

In 2013, Lotte launched its corporate social responsibility brand Mom’s Happiness to provide comfort to women and mothers, improving the environment to raise children and overcome the problem of the low birthrate.

After signing an agreement with the Ministry of Gender Equality and Family in December 2013, Lotte opened its first communal childcare center in the 15th division of Cheorwon Army in Gangwon. Since then, 16 centers have opened throughout the nation.

Along with the Korea Special Olympics Committee, Lotte Group has shown its active participation in creating a society that lives together with disabled people.

The group held the Super Blue campaign to improve public awareness about people with disabilities and to support independent living for disabled people.

The goal of this campaign is to help many people support the independence of the disabled and to spread the spirit of sharing and caring for the disabled.