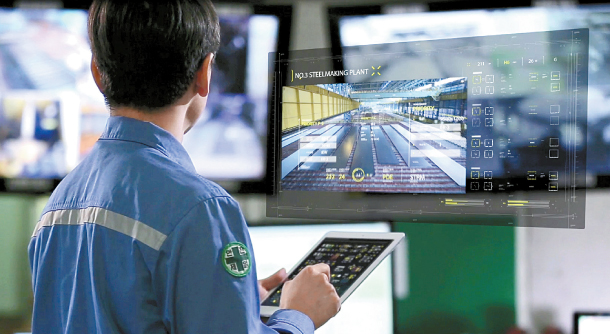 The World Economic Forum chose Posco as the World’s Lighthouse Factory, an example of the future of manufacturing. [POSCO]

A Lighthouse Factory is a factory that actively introduces the core technologies of the fourth industrial revolution - such as the Internet of Things (IoT), artificial intelligence (AI) and big data - that will lead the future of the manufacturing industry.

“Posco is applying artificial intelligence technology to improve productivity and quality in the steel industry,” said the WEF, explaining the reason for selecting Posco. “It is building its own smart-factory platform in the steel industry through collaboration with the local ecosystem of universities, small- and medium-sized enterprises and start-ups.”

Posco Chairman Choi Jeong-woo has been actively leading the establishment of the Smart Factory system. He put effort in securing global competitiveness by focusing on building safe and economical production systems, and applying effective smart technologies throughout the ecosystem to continuously provide the world’s best premium products and services. As a result, Posco is currently leading a global steelmaking industry by efficiently producing the highest quality products.

With the designation of being the World’s Lighthouse Factory by the WEF, the company will be recognized globally for its top tier technology of producing the world’s top premium products with the highest quality. It has contributed to raising the status of Korea as a technologically-advanced country.

In addition, Posco ranked 171th on the Global 500 Companies 2019, jumping 13 spots from last year by the U.S. business magazine Fortune.