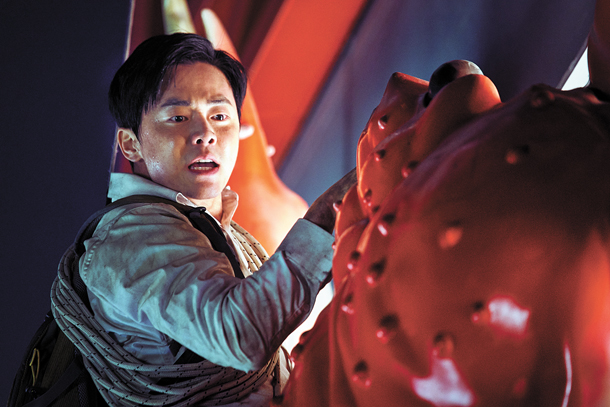 “Exit,” featuring actors Cho Jung-seok and Lim Yoon-a, shot to the top of the Korean box office on its debut weekend, ending the seven-week domination of foreign films. [CJ ENTERTAINMENT]

The release of “Exit” and “The Divine Fury” finally ended a seven-week dry spell for local movies at the Korean box office, with the two films taking the No.1 and No. 2 spots.

Over 2 million people headed to the cinema to watch action-comedy film “Exit” over its debut weekend through 1,660 screens, according to the Korean Film Council. It seems the film was a perfect getaway for people looking for 103 minutes of fun. As of Monday morning, “Exit” had pulled in over three million admissions.

It seems that people were intrigued by the combination of two very different themes — the apocalypse and comedy — fused into one film, which was impressively pulled off by actors Cho Jung-Seok and Lim Yoon-a as Yong-nam and Ui-ju, two youngsters struggling to adapt to the harsh reality of the Korean job market when a mysterious poisonous gas envelops the city. Instantly fatal to anyone who breathes in the gas, the two must now struggle to escape the disaster and get to safety. In the process of doing so, however, the two generate a barrel of laughs for the audience, even in the life-or-death situation.

“The Divine Fury” debuted second, drawing 594,000 people to 1,231 screens over the weekend. The director of this occult film about exorcism, Kim Ju-hwan, hinted at his ambition to create and expand his own cinematic universe through the movie, similar to the “Conjuring” universe. Although its release was smaller in comparison to “Exit,” the film still managed to scrape one million admission sales on its fifth day of release.

Actor Park Seo-jun features as the main character Yong-hoo, a former UFC champion with a hatred for Catholicism until a wound appears at the center of his hand. After the mark shows up, Yong-hoo faces a series of nightmares that leaves him waking up bathed in sweat. With contemporary medicine unable to help him heal the wound, he grudgingly visits exorcist priest Ahn as a last resort. Despite his contempt for the religion, Yong-hoo finds himself sympathizing with the priest and begins to assist him in his job.

“The Lion King” plunged down to fourth place, with 271,000 people heading to 840 screens. Unlike “Aladdin,” which proved a huge success just a month earlier, the live-action version of “The Lion King” only enjoyed a brief two weeks at the top of the local box office.

“Aladdin” also finally seems to be on its way out with 230,000 moviegoers watching the film in 702 screens.