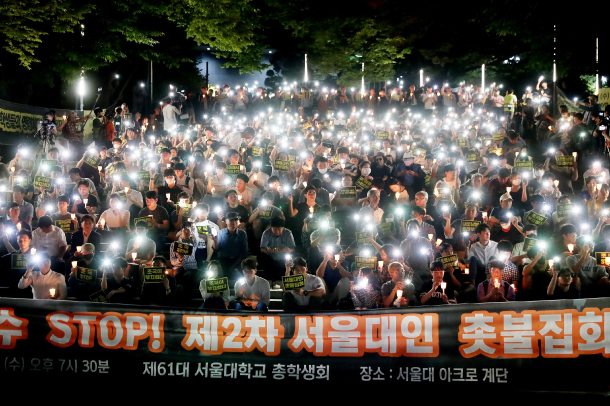 Cho, formerly presidential secretary for civil affairs for President Moon Jae-in and a law professor at Seoul National University, has been nominated as the next justice minister.

“Professor Cho Kuk was an intellect who had long called for equality in Korean society,” said Doh Jung-geun, president of the student body of Seoul National University in southern Seoul, during the candlelight rally held on campus on Wednesday. “Yet he lived a life that abused the system to boost his own social status. If someone like Cho becomes the justice minister then we are saying goodbye to values such as equality and justice.”

Prosecutors are investigating whether Cho’s 28-year-old daughter was wrongly cited as the first author of an English-language research paper in the Korean Journal of Pathology in 2008 after a two-week internship at Dankook University and used that accomplishment to gain admission to Korea University’s College of Life Sciences & Biotechnology in 2010, Seoul National University Graduate School of Environmental Studies in 2014 and Pusan National University’s medical school in 2015, where she is currently attending.

Some 700 students gathered on campus around 8 p.m. Wednesday, the second time they have rallied for the government to rescind its nomination of Cho. The first candlelight vigil at Seoul National University was held on Aug. 23.

“There is a reason why students here study into the night and why the lights do not go out in the libraries and labs during nighttime,” said Lim Ji-hyun, a student of chemical and biological engineering at the university. “It is because we believe that we all have an equal chance in trying our best regardless of who our parents are and what their status in society is […] We feel betrayed by what has been revealed and hope that Cho will step down now.”

Some 400 students and graduates of Pusan National University also held a rally on Wednesday evening.

“The young people today study hard and try their best despite the tough environment and circumstances,” said one graduate of the university in addressing the rally-goers, most of them wearing ponchos in the rain. “But look at justice minister nominee Cho. Look at the other examples of children of parents who have it all. Look at the example of government officials who say they will scrap autonomous private high schools and foreign language private high schools yet are sending their children to these schools or to well-known universities abroad. It is time for people like us to stand up.”

The rally-goers raised suspicions about the scholarship granted to Cho’s daughter, who allegedly received 2 million won ($1,644) per semester for three years, a total of some 12 million won.

To qualify as a beneficiary of the scholarship in question an applicant needs a GPA of at least 2.5 out of a 4.5 total. Cho’s daughter did not meet this requirement for the semesters that she received the scholarship.

The university’s medical school held a press conference on Monday to say that there are exceptions to this requirement “for low-income families.”

“What really makes us angry is that Cho’s daughter received a GPA around 1-something and flunked two semesters and yet she received the scholarship,” said a student of Pusan National University at the rally. “The school said it did not violate any rules but is that really right? This is what I think, she did not receive a scholarship, she received a bribe.”

The students and graduates who organized the candlelight rally issued a statement on the same day to request that Pusan National University “organize an investigative committee to uncover any violations of rules to grant favorable treatment to Cho’s daughter, regarding her admission, GPA scores and scholarship.”

Meanwhile, Korea University’s student body announced on Wednesday that it will be holding a second rally on campus on Friday evening to call for a thorough investigation into Cho Kuk.