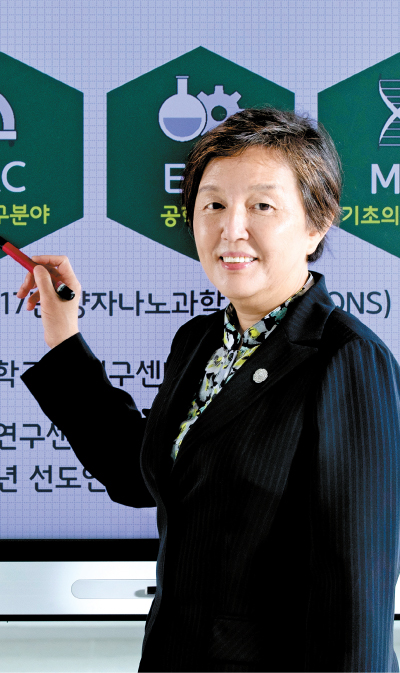 Three years have passed since it was revealed that Chung Yoo-ra, the daughter of former President Park Geun-hye’s confidante Choi Soon-sil, received special treatment in admissions and grading at Ewha Womans University in western Seoul. The university administration building was then occupied by students who demanded the resignation of then-university president Choi Kyung-hee. Finally, in October 2016, Choi stepped down.

The following year, Kim Hei-sook, 65, became the new president. In 2016, Kim led the professors’ demonstrations when students who opposed the establishment of a college of continuing education, which allows full-time workers with only high school diplomas to earn a bachelor’s degree, started a sit-in protest. Also, Kim appeared as a witness in Choi’s hearing and shed tears watching the video of students being taken by police. It’s been over two years since Kim became the president, and a lot has changed at Ewha Womans University.

“Like how Steve Jobs who studied philosophy in university made the revolutionary iPhone, science and technology is not distinct from humanity,” said Kim, adding that the era of artificial intelligence (AI) offers a new opportunity for women.

Kim said Ewha’s calling is to take the path that is less beaten and pave its own way rather than follow other universities. “Women with strong compassion will be at the helm in the era of AI,” said Kim.

In a recent interview with the JoongAng Sunday, Kim introduced the newly opened Research Cooperation Building.
Below are edited excerpts of the interview.

Q. What is the newly opened Research Cooperation Building?

A. The building is a world-class research space for AI, quantum nanoscience, solid state physics, etc. It was newly opened this semester after construction was completed in June. Ewha Womans University was selected as the software-focused university in the first half of the year [which receives financial aid from the Ministry of Science and ICT for providing innovational software education to raise the competitiveness of the nation, companies and students.] There will be many specialists on big data, AI and block chain who will lead the fourth industrial revolution. The research cooperation building is a place of empowerment of imagination, which is core to the era of AI.


Ewha Womans University’s ELTEC College of Engineering accepts 514 students every year, which is nearly 16 percent of the school’s entire quota for freshmen. Is there any reason for that?

The ELTEC College of Engineering started as the nation’s first department of computer science and is growing on a global scale. The ELTEC College of Engineering is with the Research Cooperation Building. The engineering college’s average employment rate is over 70 percent, which is higher than that of other departments. Other universities’ AI curriculums are mostly in Ewha Womans University’s Division of Mechanical and Biomedical Engineering. I’m planning to establish an AI graduate school, but the main issue is the budget.

Is it true that coding education is now mandatory at Ewha Womans University?

It is mandatory for upcoming freshmen in 2020. Few courses related to coding education will be created as a core requirement for the students. Coding education is necessary for developing competent people in the era of AI.

You attended the U.S.-Korea Conference on Science, Technology, and Entrepreneurship, and you are also a philosophy scholar. Why are you so passionate about science?

In my doctoral thesis, I dealt with Immanuel Kant [the influential German philosopher in the Age of Enlightenment]. Kant aimed to justify Newton’s physics laws. Studying science, I realized that philosophy is not distinct from science. The UKC 2019 themed “Smart Science, Engineering and Health for Livable Communities” covered broad areas of science and technology, including but not limited to basic science, applied science, engineering, technology, etc. I realized the importance of the cooperation of a collective intelligence group.

Ewha Womans University Seoul Hospital was newly opened in Magok-dong, western Seoul, in May 2019. What is its aim?

Ewha Womans University Seoul Hospital is a hospital that provides medical services truly centered on the patients. It is aimed to grasp the spirit of Boguyeogwan, the first women’s hospital in Korea established in 1887 for women during the Joseon Dynasty (1392-1910) who could not access proper treatment.

Why did you cry during Choi Soon-sil’s hearing in December 2016?

I got emotional at the time and wiped my nose with some tissue. Once I returned home, my husband asked me why I cried. [The photos in the media] showed my reaction in contrast to other’s impassive faces. I realized then that I cried. I could not think of anything during the hearing.

Many young people are expressing anger about the unfairness of the college admissions system. What do you think about this?

Ewha Womans University processes admissions strictly and fairly. Chung Yoo-ra’s scandal is due to the failure of a human being, not a system. The person in charge at the time did not follow the rules. The ongoing [Justice Minister] Cho Kuk scandal needs to be seen in the aspect of justice in society instead of fairness in the college admissions system.