The cultural properties of a country, whether they are deemed national treasures or not, are valuable parts of that country’s story. They are seen as physical representations of national identity. Because of their historical significance, countries make every effort to preserve them well and use them to educate the next generation. Sadly, many of Korea’s cultural artifacts were stolen during Japanese colonization (1910-45) and the Korean War (1950-53). According to recent statistics compiled by the Overseas Korean Cultural Heritage Foundation, 182,080 cultural objects are currently located outside Korea, scattered across 21 different countries. That number is only increasing as research continues. Of course, not all of the artifacts abroad are stolen properties - among them include cultural properties that have been given as gifts from kings and political leaders. As Koreans slowly lose interest in the valuable treasures that haven’t come home, dealers are briskly trading the Korean artifacts around the world, oftentimes illegally. Forgotten Treasures is a three-part series that sheds light on Korea’s cultural properties outside of the country and the efforts that are being made by the country to bring them back home. 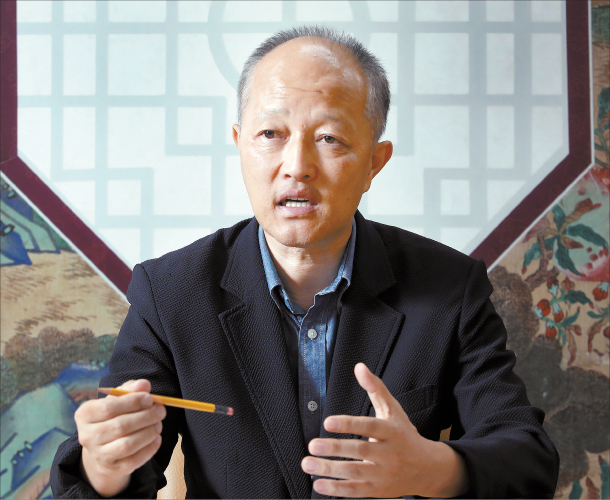 Seo Joon, an official at the Collection Management Department of the National Palace Museum, who is an expert of the royal seals of the Joseon Dynasty (1392-1910), talks about the seals during an interview with the Korea JoongAng Daily at the museum in central Seoul on Sept. 10. [PARK SANG-MOON]

Many of Korea’s cultural properties that were illegally taken outside the country during the Korean War (1950-53) were state seals known as guksae and royal seals known as eobo used during the Joseon Dynasty (1392-1910) and the Korean Empire (1897-1910). Eobo were produced at the same time as eochaek (investiture books) and usually travelled and were stored together, so much so that they are listed on Unesco’s Memory of the World list as one item.

While most of the investiture books have stayed intact and well preserved in their home country, the eobo seals have not been as lucky. They were buried, lost, damaged in fires, stolen, reproduced or were taken outside the country. The seals are also the only cultural property among all the others that were looted that can be lawfully seized and repatriated by the U.S. Immigration and Customs Enforcement’s Homeland Security Investigations Office (HSI).

Seo Joon, an expert of the state and royal seals of Korea, who has been working as an official at the collection management department at the National Palace Museum of Korea since 2002, says it’s because the seals represent “the spirit of the royal court of the Joseon Dynasty” and more than 500 years of the Korean history.

“The Cultural Heritage Administration signed a memorandum of understanding with the HSI to allow forfeiture of the seals upon discovery,” said Seo. “This special treatment has been agreed upon as both countries understand the value of the seals and what they mean to Koreans and their national identity.”

“It’s the same reason why they were looted and taken outside the country,” Seo added. Because the seals, especially the royal seals, were bestowed to the kings and queens as well as the crown princes and their wives as prospective successors to the throne, according to Seo, “if one of them is missing, it’s like having an incompleteness in a series.”

“Of course there’s the Annals of the Joseon Dynasty as well as the investiture books that can testify what kind of seals were bestowed when to whom, but it’s not the same without the actual relics,” said Seo.

To hear more about the seals, the Korea JoongAng Daily recently sat down with Seo for an interview at the National Palace Museum of Korea in central Seoul. The following are edited excerpts. 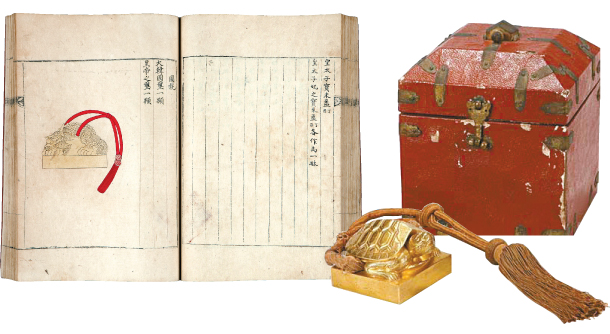 Right: Eobo is featured in uigwe (books that detail in text and drawings protocols for various events at the royal court of Joseon) for the state ceremony to proclaim Korea as an empire in 1897. Left: A royal seal of King Taejo (1335-1408) and its box. [JOONGANG ILBO, YONHAP]

Q. You are an expert whom the Korean government turns to when authenticating seals when they are discovered overseas. I heard you had to tell whether the royal seal of King Hyeonjong was real or fake by looking at several photographs sent via KakaoTalk. Is that true?

A. That’s right. Kim Min-cheol, a KBS documentary producer told me he wanted to do a story on cultural properties that are unable to be returned home. So I told him I will cooperate and gave him some information about the royal seal of Queen Munjeong, which was discovered in the Los Angeles County Museum of Art (Lacma). The museum had acquired it from a Los Angeles-based collector and dealer named Robert Moore in 2000 so I told Kim that if he visits Lacma, the museum will give him Mr. Moore’s contact information. So he did and went to interview Moore at his house. While Kim was there, he was filming and talking about how Moore had purchased the seal at an auction in Japan. Then Moore told him to wait a while and then appeared again holding the royal seal of King Hyeonjong in his hand. In the video clip I saw, sent by the producer, Moore carelessly put it down on the table saying that he also purchased the seal together with the royal seal of Queen Munjeong but that he did not sell it to the museum as it was fake. But the producer wanted to double check it and sent me several photographs via KakaoTalk while I was in Seoul sleeping. As soon as I saw the pictures, I knew it was real, and I can’t describe the excitement I felt that night.

How could you tell it was real and why did Moore believe it was fake?

I’ve been looking at the seals every single day for almost all my life. When I look at the seals, I can tell which are real and which are fake. But I couldn’t just say that to the producer, who was as excited as I was for the possibility of getting an exclusive story. I told him I would give him evidence the next day and showed him the uigwe (the book that details in text and drawings protocols for various events at the royal court of Joseon) that states the royal seal of Hyeonjong will engrave five characters “wang-se-ja-ji-in.” Usually, the seals engrave four characters for the crown prince, but for Hyeonjong, the royal court engraved five characters and the one at Moore’s house had exactly five. Moreover, I could instantly tell it was real by looking at the red twine on the seal. The shape of the tassel as well as its color and the thickness all point to the time when the seal was created. That is how we could prove it authentic and bring it back to Korea.

Moore believed it was fake because he was told so by some Korean art historians. They are quite famous people in this field, but I think it’s unnecessary to give their names here. Anyway, these people frequented Moore’s house as he collected many Korean artifacts and told him that the royal seal of Hyeonjong was not real so as a foreigner, he believed them. In fact, not many people can tell whether they are authentic or not by merely looking at them because the seals had been enshrined and not revealed to the public at exhibitions as often in recent years.

Many of the imprints of the royal seals that are now safely back in Korea have been digitally restored. [JOONGANG ILBO, YONHAP]

There are still 76 seals missing. As I know, related laws have been revised in Korea and the United States making the seals stolen property. Therefore, even if someone purchased a seal at an auction or through a dealer without being aware that they are stolen national property, the country can forfeit them. Nevertheless, why is it still so difficult to locate them and bring them home? Why don’t the possessors come forward and return the seals since they can’t sell them anyway?

They hesitate to do so, now that they can’t get anything in return, not to mention having the possibility of getting in trouble with the government.

Here’s an example. A Korean antique collector purchased the royal seal of Queen Jangnyeol from an overseas auction site for 25 million won ($21,000) after discovering it late last year. To get it appraised, he brought it to the National Palace Museum of Korea. Since it was real, the museum could not return it to him nor pay him on the spot as the law requires the museum to forfeit the property rather than pay the man who brought in the “stolen artifact.”

Of course the man filed a lawsuit against the museum and the Cultural Heritage of Korea, but lost. When you think about it, he used his own time, money and energy and brought the valuable treasure of Korea back home but couldn’t get anything from it, except being labelled a thief. If I was the judge, I would give the ownership to the museum but make the Korean government provide the man with some kind of compensation that covers the money he spent to purchase the seal and then ship it to Korea. Also I would publicly turn this into an event and make the government gift him an honorable certification or something to show appreciation. Had it not been for his discovery, our children would’ve not been able to see the royal seal of Queen Jangnyeol.

If this was set as a precedent, I think there would be more people who are willing to come forward. But right now, they think that the seals will be forfeited for nothing if they reveal their whereabouts. Don’t you think so?

Moreover, I heard that the Americans are really afraid of the HSI as it is the department that forfeits and imposes fines and more taxes. Since this department deals with forfeiting the seals, I think it makes those in possession of seals more hesitant to come forward with the seals as they don’t know what kind of trouble they may get into. I would like to encourage those who possess Korean seals of the Joseon Dynasty to contact the Korean government. We won’t seize them without question. We are more than happy to receive the seals and provide some kind of compensation for such an honorable gesture.

Compared to other cultural properties like paintings that can get damaged easily with time and environment, I guess the seals are discovered in quite a good state, right?

That’s true. But I was quite shocked about 10 years ago when a Korean-American came to the museum with the seal of Emperor Gojong (1852-1919) of the Korean Empire. She went to an antique store in Insa-dong and to see how much gold was in it, and they drilled the bottom surface of the seal. Of course it’s plated copper with gold. The main material is copper mixed with tin, and there’s hardly any gold. Some people think the gold seals are all gold, but they are not. It was so stupid of the dealers and the person who had the seal to make a hole in such a national treasure. The seals are indescribably valuable as a cultural artifact but as a metal, they aren’t worth a lot.

Because this was before the revision of the Cultural Properties Protection Law, the Cultural Heritage Administration could purchase the seal from her, even though it was damaged. We asked her to put down her desired amount on the form, and she received the amount she put down. While she got what she wanted, it was a painful experience for us.