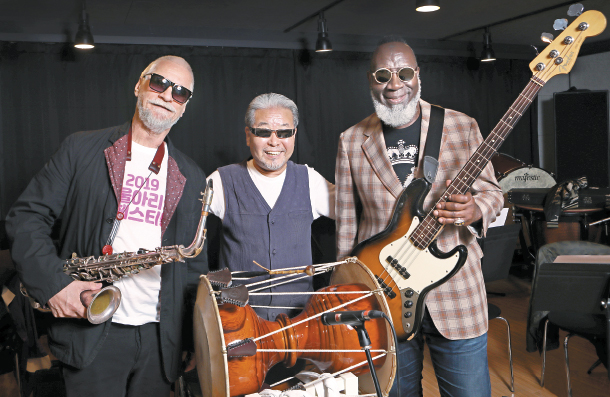 Saxophonist Wolfgang Puschnig, left, from Austria, Kim Duk-soo, Korea’s renowned traditional percussionist and a virtuoso of the janggu (hourglass-shaped drum), middle, and bassist Jamaaladeen Tacuma, right, from the United States, pose for a photo after a rehearsal of the opening concert of the Seoul Arirang Festival which kicks off today at 7 p.m. in Gwanghwamun, central Seoul. [PARK SANG-MOON]

The familiar mournful tone of “Arirang, Arirang, Arariyo” that saddens many listeners’ hearts is not all there is to the famous Korean traditional folk song “Arirang.” The annual Seoul Arirang Festival, which kicks off its seventh edition today at the Gwanghwamun Square in central Seoul, aims to celebrate the song and allow listeners to enjoy it without any boundaries.

“I’ve studied Arirang for many years,” said Kim Duk-soo, Korea’s renowned traditional percussionist and a virtuoso of the janggu (hourglass-shaped drum). “Arirang is the song that is in Koreans’ DNA because of its three-beat rhythm known as saemachi. It’s very folksy, religious and directly connected to hydrography. This triple time can go faster or slower. It doesn’t matter as the basis is the three beats, which is linked to the sky, the earth and humans.”

But merely explaining that the song is ours and that we should treasure it because it is officially recognized on Unesco’s Representative List of the Intangible Cultural Heritage of Humanity, is not enough to persuade the younger generation and the general public to feel closer to Arirang.

That is why Kim, who is spearheading the opening concert of the Seoul Arirang Festival, decided to establish a project band Arirang Super Band. The band is composed of Kim’s samulnori ensemble, which includes a percussion quartet featuring four percussion instruments: buk (barrel drum), janggu, a jing (gong) and a kkwaenggwari (small gong). The group is composed of pansori master Ahn Sook-sun, as well as western musical instrument players including jazz trumpeter Lee Ju-han, violinist Huh Hee-jeong and keyboardist Nam Meari.

Kim also included young Korean hip-hop dancers in the group and decided to invite two artists from abroad who he has been collaborating with for more than 30 years to produce the music based on nongak, or traditional farmer’s music.

“Not only to show how Arirang can be cross-generational, but also cross-national, I wanted to invite my two dear friends and renowned artists, saxophonist Wolfgang Puschnig, who came from Austria and bassist Jamaaladeen Tacuma who came from America.”

“It can definitely be cross-national,” said Tacuma, who was rehearsing for the opening concert with the band members at a rehearsal studio in Samseong-dong, southern Seoul on Wednesday. “Even if a person does not know what ‘Arirang’ means, they’ll feel something when they hear it. ‘Arirang,’ I think is one of those powerful songs that doesn’t have to be explained. You just feel it and you just react from it. When I hear ‘Arirang,’ it gives me this feeling of warmth. It’s very organic and natural at the same time. It’s not music that is superficial. It’s very pure and spiritual.”

As for Puschnig, “comfort” is the word that comes into his mind every time he listens to “Arirang.” “I think it touches the same thing inside everybody. There’s so many different ways and so many different expressions of ‘Arirang,’ but in the end, it all goes to the same spot,” he added.

The trio’s first encounter goes back to 1987 in Vienna at an international festival for percussion instruments. Although it was through Kim the two foreign artists ever heard “Arirang,” and gugak (traditional Korean music) for the first time, the three, along with other Korean and western musicians got together to form a project group called Redsun-Sumulnori and produced what is now called world music.

“Back then in 1988, words like world music and multi-culture, cross-genre were starting to get used,” said Kim, “and many of these words were used to refer to the music we created.

“We’ve been doing this for more than 30 years,” Kim said. “I am a traditional musician and for the past 30 years, I’ve been working with new sounds, working with people in different age groups and from diverse genres, trying to mix different sounds and continuously making attempts to create something new from our tradition to the extent where we don’t distort it.”

That’s what audience members will see during the opening concert of this year’s Seoul Arirang Festival.

“We got together yesterday as well for the rehearsal of the opening concert and it was interesting to see how the hip-hop dancers dancing to the rhythm of the traditional percussions reminded me of the samulnori performances and the traditional dances,” said Tacuma.

The history of Redsun-Samulnori goes back “too long,” and since they are now “all aged over 60,” they can’t remember how many different countries they toured together, how many albums they released, or how many different versions of Arirang they have played, but their next hope is to perform “Arirang” together in North Korea.

“How we met and got together and came this far is all so coincidental,” recalled Kim. “I think we are a great role model for younger musicians, and since we are getting old, I hope to foster more international project groups like us and go cross borders and embrace and enjoy each other’s cultures.”

“I think Europeans, Americans and Asians - all of them were quite shocked to see us, a group of musicians with different skin colors playing western instruments and traditional Korean instruments in our own style back in 1980s and 90s and they are still quite impressed now,” Kim added. “We were and still are sensational and we hope to celebrate and enjoy folk music this way.”

Seoul Arirang Festival kicks off today for three days in Gwanghwamun, central Seoul. The opening concert by the Arirang Super Band begins at 7 p.m. There will be another music festival the next day also at 7 p.m. with performances by Dynamic Duo, Dickpunks, and The Solutions.

“Pan-Nori Gil-Nori,” where visitors can listen to almost all the renditions of different Arirang, will begin at 4 p.m. on Sunday. There will be various traditional street performances for visitors to watch during the three-day event as well as various experience programs. The closing ceremony starts at 6 p.m. on Sunday. For more information, visit seoularirangfestival.com