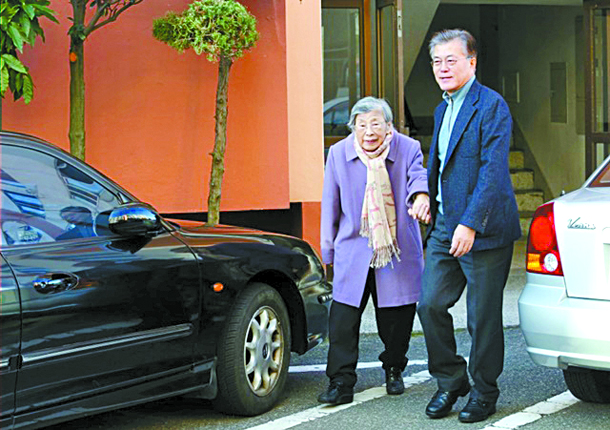 President Moon Jae-in, right, and his mother, Kang Han-ok, attend a Catholic mass on Christmas Day 2016, before Moon was elected president. Kang died on Tuesday in a hospital in the southeastern city of Busan at the age of 92.

“Upholding his mother’s wish, President Moon said he will host a funeral as a family event,” said Blue House spokeswoman Ko Min-jung.
“The president respectfully asked the public to not make a visit to the mourning altar or send flowers,” she said. “Please send your heartfelt wishes as condolences.”

According to the Blue House, the family will observe a three-day mourning period. The burial will take place on Thursday. The Blue House did not announce the venue of the funeral or the location of the burial.

A presidential aide said the Blue House will operate as normal under the supervision of Chief of Staff Noh Young-min. Presidential aides won’t attend the funeral en masse, the official said.

Moon’s planned trip to Thailand from Nov. 3 to 5 to attend Asean summits will proceed as scheduled. The president, however, is expected to miss an anticorruption conference scheduled for Thursday.

According to sources at the Blue House, Kang was recently admitted to a hospital in Busan. She died in the evening, and Moon and his wife, Kim Jung-sook, were by her side.

It is the first time that an incumbent president suffered the loss of a parent.

Kang is survived by five children. Moon has one older sister, one younger brother and two younger sisters. The president’s father, Moon Yong-hyung, died in 1978.

Moon’s parents were refugees from North Korea who fled their hometown during the Hungnam evacuation of December 1950.

The late Kang was a native of Hamhung, South Hamgyong Province. In an interview with the JoongAng Ilbo in April 2017, one month before the election that brought her son to power, Kang said she was the only one from her family to flee to the South.

“After I came to the South, I had no place to go for holidays,” she said. “I really missed my hometown. I shed tears under the moonlight. I still think about the old times. A hometown is something you can never forget.”

The family settled in the southern part of South Korea, and Moon was born in Geoje, South Gyeongsang, during the final year of the Korean War (1950-53). Moon recalled that his father’s business failed when he was young, and his mother was the main breadwinner of the family.

Earlier Tuesday morning, a Blue House official said Moon’s mother was in critical condition and the president would rush to Busan after a scheduled public appearance. The president visited his mother after he attended a leadership conference of the Saemaul Movement leaders earlier in the afternoon.