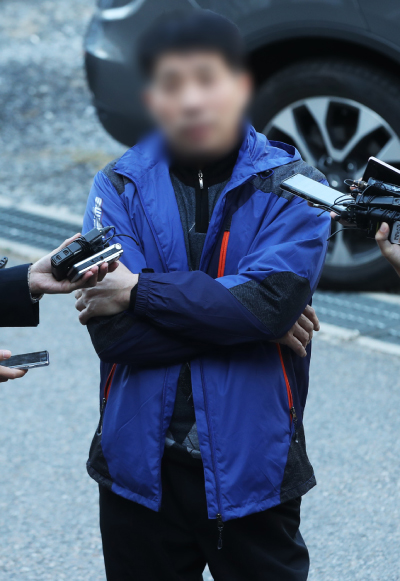 The 52-year-old man, identified only by the surname Yoon, who served 20 years in jail for the 1988 murder of a woman in Hwaseong, Gyeonggi, on his way to take a police hypnosis test at the Gyeonggi Nambu Provincial Police Agency on Monday. His photo was pixelated by the wire service. [YONHAP]

A man who got a life sentence in jail for a copycat murder insists he is innocent - and so does the convicted killer he allegedly copied.

The 52-year-old man, identified only by his surname Yoon, who served 20 years in jail for the 1988 murder of a woman in Hwaseong, Gyeonggi - where a string of women were killed in similar circumstances in the 1980s - took a police hypnosis test on Monday in an effort to prove his alleged innocence a decade after being released from prison on parole.

At the time, the police accused Yoon of killing the girl to mimic the seven preceding murders, claiming the circumstances of Park’s homicide did not fully align with the other cases. In addition, Yoon’s pubic hair matched evidence at the scene, according to police, and he had the same blood type as a blood sample from the scene.

Yoon, a 22-year old mechanic at the time, confessed to the crime and was sentenced to life in prison. He served 20 years in prison before being released on parole in 2009.

Both at his trial and later in an interview from jail, Yoon insisted that he was innocent and that his confession was forced from him through police intimidation and torture.

It was only 31 years later that the case took a major turn.

A new form of DNA analysis traced several of the unsolved Hwaseong murders to Lee Choon-jae, a man serving a life sentence in the Busan Penitentiary for raping and fatally strangling his ex-wife’s sister in 1994 in Cheongju, North Chungcheong. After a series of questionings by police, Lee confessed to committing 14 other murders in Hwaseong and Cheongju - including that of the 13-year-old.

While police were at first skeptical of Lee’s confession of the eighth murder, the convict was able to describe in vivid detail features of the crime, like the location of the victim’s house and the layout of furniture in her room, as well as details about her body - specifics that only the perpetrator would have known.

So far police have been unable to corroborate Lee’s claims due to the evidence from the case having been lost or destroyed in the 31 years that have elapsed.

The confession inevitably ignited controversy over police brutality forcing Yoon to confess to a crime he may not have committed. But police officers involved have strongly denied allegations of torture, saying there was clear evidence that pointed to Yoon as the culprit.

While he was initially reluctant to go public about the case in spite of Lee’s confession, Yoon eventually broke his silence and announced last week he would seek a retrial to prove his innocence, aided by one of Korea’s most prominent criminal lawyers, Park Joon-hyung.

“I thank Lee [Choon-jae] for confessing, even if it comes so late,” Yoon told reporters last week as he entered the Gyeonggi Nambu Provincial Police Agency for a new round of investigation into his case. “Without his confession there would not [have been a new investigation] and my case would have been lost.

“I am not a criminal and have been subject to an unfair life,” he added.

On Monday, Yoon undertook a hypnosis test to prove his testimony upon police request. Saying he trusts contemporary police 100 percent, Yoon told reporters he hopes the officers who allegedly tortured him decades ago also consent to hypnosis tests to prove their assertions.