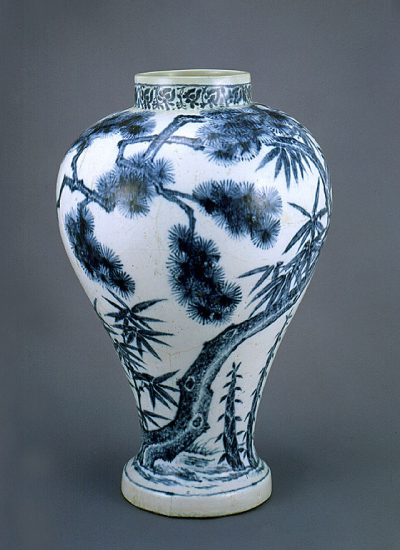 Name: Blue and white porcelain jar with pine and bamboo designs and inscription of Hongchi

This porcelain jar was made in 1498 during the Joseon Dynasty under the reign of King Seongjong. The jar narrows a bit near the lip and has very soft and smooth lines reminiscent of the plum flower-type bottles made during the Goryeo Period. It also has a very thin middle section, which is much more confined than the shoulder of the jar. In contrast to the middle, it sharply widens from the middle.

The Ewha Womans University Museum also holds a number of jars of the same kind, and they are registered as Treasure No. 644. It is supposed that this vase was used by those who performed various ceremonies at the King’s Palace. Carved on top are lotus and creeper patterns, and pine is painted boldly on the rest. All the artwork is done carefully to promote realism.

This jar was stolen twice while it was at Hwaeom Temple in Mount Jiri located in southwestern Korea. Today, it is placed in a secure place at the Dongguk University Museum in Seoul. It is inscribed with “Second year of the rule of King Hyojong Ming Dynasty in China, A.D. 1489.”