Warrant is sought for pastor who led big rally

Warrant is sought for pastor who led big rally 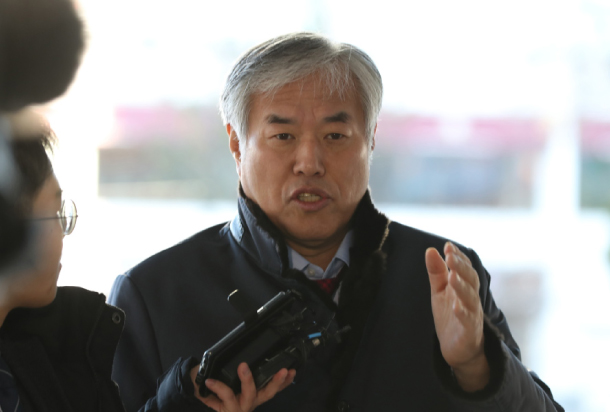 State prosecutors on Friday sought a court warrant to arrest a conservative pastor for his alleged role in a violent anti-government protest.

Rev. Jun Kwang-hoon, chief of the Christian Council of Korea, led a mass rally in central Seoul on Oct. 3 calling for the resignations of a scandal-ridden justice minister and President Moon Jae-in.

Police have investigated the pastor, also chief of a coalition of conservative groups which organized the rally, on suspicions that he instigated protesters to use violence against police when they marched toward the adjacent presidential office.

Prosecutors requested a Seoul court issue arrest warrants for Jun and two other protest leaders on charges including obstruction of justice and breaching assembly and demonstration laws, according to legal sources with knowledge of the matter.

Hundreds of thousands participated in the rally in Gwanghwamun, central Seoul. Speakers on stage shouted radical phrases such as “Seize the Blue House” and “Arrest the president.”

Some 40 participants, including defectors from North Korea, were arrested at the scene for kicking and punching police officers while marching toward the presidential office.

Jun has criticized the ongoing investigation. In a statement released Thursday, the fiery conservative icon blasted the police for not staying politically neutral and engaging in “religious persecution.”

The pastor also faces a separate police investigation for allegedly inciting a rebellion and illegally collecting donations during the rally.