Preserving Korea’s declining bathhouse culture: As fewer people bathe outside of their homes, spaces are changing

Preserving Korea’s declining bathhouse culture: As fewer people bathe outside of their homes, spaces are changing 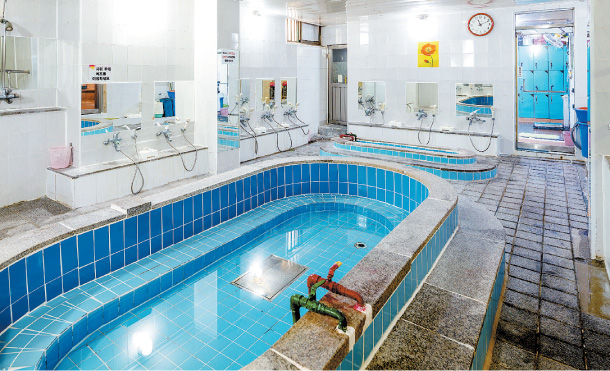 Daeho Bathhouse, located in Gangseo District, western Seoul, has been open since 1969 and is one of the few small bathhouses in Korea that has been open for decades. [NATIONAL FOLK MUSEUM OF KOREA]

Public bathhouses in Korea may one day exist only as a museum exhibition - or so a group of experts at the National Folk Museum of Korea in central Seoul thought a few years ago when they decided to launch a research project on the topic.

“We’re talking about the smaller bathhouses, the ones that we used to have just a few steps from our homes,” said Yoon Sung-yong, director-general of the museum in central Seoul. “Growing up, going to public bathhouses was a special occasion, a stop we’d make especially prior to Chuseok [harvest holidays] or Seollal [Lunar New Year’s Day in Korea]. But with the franchise, large-scale sauna businesses taking over the industry and less people finding the need to bathe outside of their private bathtubs at home, smaller public bathhouses are closing down around us.”

From the late 1990s to today, around 3,000 public bathhouses closed down around the country, according to the museum.

“There have been studies before about how people practiced bathing regularly in the ancient times up to the Joseon Dynasty [1392-1910] and about the Japanese bringing their culture of public bathhouses into Korea during their occupation of Korea [1910-1945],” Yoon said. “But the studies stop there. We decided to collect more recent records of public bathhouses and the culture built around them in Korea.”

The team at the museum tried to answer questions as to how the practice of bathing, which was once exclusively for kings and queens in ancient Korea, came to be commonplace for the rest of the population; generational changes since the 1990s and its affect on bathhouses; and how some designers are getting creative with re-using and preserving spaces that were once active bathhouses.

The following are some findings from the museum’s report published last month. 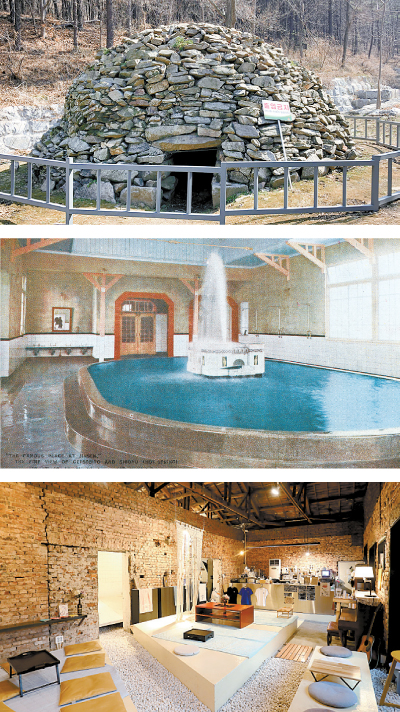 From top, an example of a sauna used in the Joseon Dynasty (1392-1910) in Ganghwa County, Incheon; a postcard with a photo of Wolmi Jotang Bathhouse in Incheon, which was popular in the 1920s; Haenghwa Coffee, a cafe in western Seoul that was formerly a bathhouse. [NATIONAL FOLK MUSEUM OF KOREA]

It began with Cholera

Bathing in a tub filled with hot water was, for a long time, an exclusive practice reserved for the kings and queens of Korea in the ancient times and into the Joseon Dynasty.

The idea of having private bathtubs for people outside of the royal family was so unimaginable that when an official in King Sukjong’s time (1661-1720) made a bathtub out of brass, he was suspected of gaining wealth through dishonest means. He was fired from his position for corruption, according to records.

Things changed during the epidemic outbreaks in Korea that began in 1821.

The illness, recorded as “mysterious disease” or “unidentified epidemic” in the royal court’s records, makes its first appearance in 1821 during the reign of King Sunjo (1790-1834). The disease killed tens of thousands through 1822. The illness, largely identified as cholera by the symptoms recorded, as well as the timing of the spread of the disease in other parts of the world at the time, recurs throughout the 19th century, as recorded in Ilseongnok, a daily record of events that took place from 1760 to the end of the Joseon dynasty in 1910.

It wasn’t until the late 1880s that people caught onto the practice of maintaining better hygiene to prevent epidemics.

Pak Yung-hio, an activist during the Joseon Dynasty, proposed to King Gojong (1852-1919) a set of reform measures for Joseon in 1888, which included setting up public facilities where people could wash up. Aware that not too many people could afford clean water at their homes, Pak suggested the government to build “large-sized public bathhouses so that the poor can come and wash up.”

It wasn’t long after this that Koreans started building public bathhouses, with some of them quickly focusing on the commercial side of the business as it grew rapidly with the industrialization and urbanization of the country following the Japanese occupation of Korea. 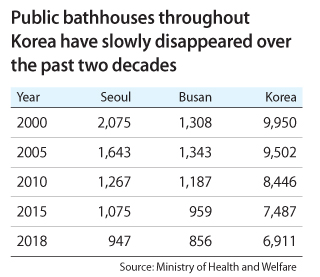 Housing designs changed over the years and brought bathrooms, which were once located in the backyard of one’s home, into the house in the 1920s, and bathtubs into the bathrooms during the 1970s boom of apartment construction.

But not everyone had access to these newer styles of home.

“Nearly half of the population in Seoul did not have a bathtub in their bathrooms at home, so the practice of making regular visits to a local public bathhouse was quite commonplace,” the museum said in its report. “And even if they did, in the 1980s, only 30 percent of households were estimated to have had hot water at home.”

Even those who had bathtubs at home and perhaps hot water, too, were not accustomed to using them, according to the museum’s findings.

“The culture was quite strong at this time [in the 1980s and ‘90s] that some people, even if they had a bathtub at home, did not use it for taking baths but rather to wash some laundry or even to make kimchi,” the museum said. “It was very much in culture then for people to go to public bathhouses to take baths regularly.”

According to the museum, the number of bathhouses throughout the country jumped from 770 in 1960 to 8,266 in 1990. Just counting the bathhouses located in Seoul, the number jumps from 146 to 2,109 in the same time period.

The bathhouse business saw a downturn, however, as the millennials who frequented bathhouses in their childhood, grew up.

“Most of my customers today are elderly people,” Park Noh-sung, owner of Daeho Bathhouse, which has been open since 1969 in Gangseo District, western Seoul, told the museum. “They come regularly, but one day you don’t see them anymore and the case is usually that they have grown too frail and have gone into nursing homes.

“Taking a bath regularly is not really the culture for the younger generation. They’re good with just showers,” Park said. “So it’s natural that we’re losing customers. I don’t know how long I’ll be in business.”

“The customers that I have day to day are the exact same people who have been coming for years,” Yoon Yeong-ja, owner of Maul Bathhouse in Seodaemun District, western Seoul, which has been in operation since 1971, told the museum. “Some have been coming for 30 years and even get in fights with other customers over seats in the bathhouse.

“The bathhouse has had its heyday once,” she added. “It’s not the same today. I keep the business open because it’s what I’ve been doing for so long.” 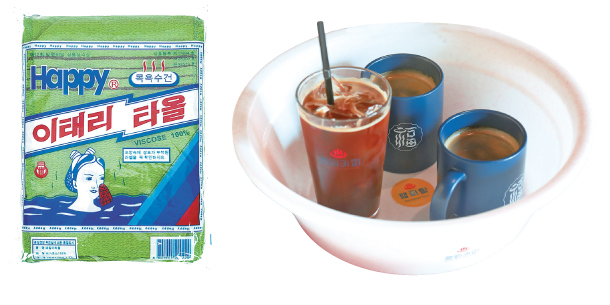 Coffee in a tub

As small, local bathhouses continue to go out of business, some designers have been creative in transforming these spaces.

The Haenghwatang Bathhouse in Mapo District, western Seoul, which was built in 1958 and went out of business in 2007, was transformed into a cafe in 2016.

“The cafe doesn’t have a huge bathtub sitting in the middle, because that was already gone by the time I stumbled upon this space,” Seo Sang-hyuk, CEO of Haenghwa Coffee, told the museum. “But regardless of the changes that the building has gone through, it remains a fact that this was a sought-after space once by people in their 20s and 30s, and it could be revived into such a place again. It’s just in a different time period with a different purpose.”

Hakcheontang Bathhouse in Cheongju, North Chungcheong, which was open from 1988 to 2010, has been renovated into a cafe as well. Visitors can drink their coffee while sitting in bathtubs.

The nonprofit organization With Water has tried to transform bathhouses into rehabilitation centers for people with disabilities.

“Bathhouses used to be a place for people to relax in,” said Han Jin-young, director of With Water. “We thought it’s better equipped than a swimming pool to be used as a rehabilitation center.”

But when Han inquired about renting closed-down bathhouses, she said she was asked to pay rents that the organization could not cover.

“It looks like there are some hurdles to cross, but we’ll keep trying,” she said.

The National Folk Museum put together the report over some six months of research last year. It said it will possibly hold an exhibition on the topic in the future.

“It’s a part of our culture that is fading,” said Lee In-hye, a researcher at the museum. “When we spoke with the owners of public bathhouses, they were alike in emphasizing how each of these individual bathhouses are cherished by locals and hold special memories for customers.”