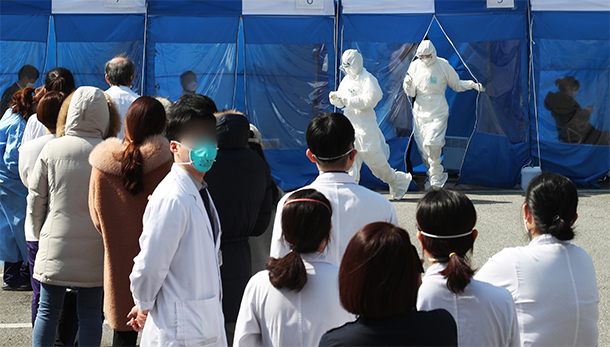 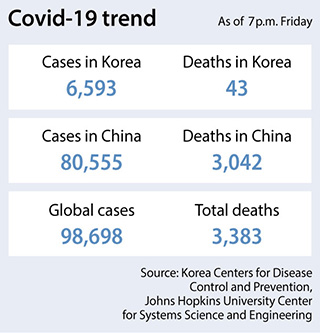 Korea’s coronavirus caseload continued to grow Friday, as alarming new clusters of infections were reported at a hospital in the capital region and a nursing home near Daegu, the epicenter of the outbreak.

According to the Korea Centers for Disease Control and Prevention (KCDC), the nation’s total number of infections reached 6,593 as of 4 p.m. Friday. Since Thursday, 505 new cases were reported.

The country has seen hundreds of new cases over the past days. On Thursday, 467 new cases were detected compared to 435 on Wednesday and 851 on Tuesday.

The number of total deaths was 43 as of 4 p.m. Friday, up one from the previous day. The latest casualty was confirmed in Daegu. The victim was an 80-year-old man who was diagnosed on Feb. 28 and treated at Kyungpook National University Chilgok Hospital.
According to the KCDC, more infected patients were released from isolation after testing negative for the virus. As of Friday, 108 people were completely recovered from the disease.

While most cases are still concentrated in Daegu and Cheongdo County in North Gyeongsang, concerns grew about infections in other areas.

A total of 51 workers and patients at a nursing home in Bonghwa County, North Gyeongsang, tested positive for the coronavirus as of Friday afternoon. The facility, a home for the elderly, has 116 people living at it, including 56 patients, and 44 percent are infected.

Another alarming cluster was reported at a general hospital in Seongnam, Gyeonggi. The emergency room and outpatient facilities at Bundang Jesaeng General Hospital were shut down Friday after health authorities confirmed that nine medical staff and patients were infected.

According to the Seongnam city government, three patients, two nurses, three nursing assistants and one family member of a patient tested positive for the virus as of Friday afternoon.

KCDC Director Jung Eun-kyeong said Friday that clusters of infections accounted for 71.7 percent of total confirmed cases as of Friday, up 2.3 percentage points from Thursday.

Jeong also stressed the importance of conducting autopsies on patients who died to understand the disease. She said no autopsies have been conducted as of Friday because it is hard to obtain consent from family members of the victims.