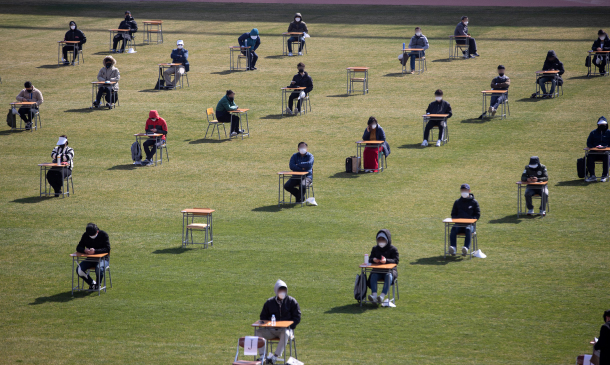 Applicants for jobs at the Ansan Urban Corporation wait for a written test to begin on Saturday at the Ansan Wa Stadium in Ansan, Gyeonggi. The company placed desks 5 meters (16.4 feet) away from one another and required all test-takers to wear face masks, have their temperatures taken and use hand sanitizer before and during the exam to guard against the transmission of the coronavirus. [NEWS1]

The government has announced a two-week extension of its so-called high-intensity social distancing campaign, urging everyone to abide by strict health guidelines through April 19 in order to not contract or spread the coronavirus.

As daily new infections in Korea continue to hover around 100, health officials said Saturday their goal was for the number to drop below 50, given the country’s low number of negative pressure rooms for critically ill patients.

Under the high-intensity social distancing program, members of the public are strongly advised not to leave their homes and keep a distance of about two meters (6.6 feet) between others at all times.

Private cram schools, religious facilities, gyms and many other public establishments where people are close to one another are advised to temporarily shut down or disinfect their facilities regularly and require visitors to wear face masks at all times.

As of Saturday midnight, a total of 183 people have died, up from 169 on Wednesday midnight, while 6,463 have been declared fully recovered. 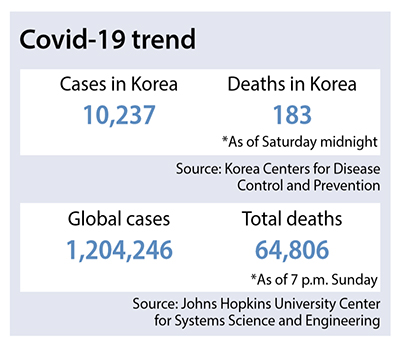 Homegrown infections have been falling compared to February and early March except when clusters sporadically occurred at hospitals or churches. But the rising number of people arriving in Korea after contracting the disease from a foreign country has become a new worry for local health officials as more Koreans who studied or lived abroad are returning home to escape outbreaks overseas.

Many local government offices have reported cases of the returnees disobeying their two-week self-quarantine order and lying to epidemiologists.

In Busan, officials announced Saturday that an infected Korean teenager studying at a university in Kansas took high amounts of fever reducers to pass through American and Korean airport customs late last month after he felt symptoms of the virus at his dorm room in the United States and wanted to fly home for treatment.

Busan officials did not explain how he was busted or to whom exactly he lied, but some local media outlets reported over the weekend that the teenager was believed to have taken nearly 20 pills to bring his body temperature down.

Busan officials said he testified to having felt his first symptoms on March 23. He boarded a Korean carrier on March 24 and arrived at Incheon International Airport on March 25. He tested positive for the coronavirus at his local health community center in Busan the very next day and was hospitalized. Both his parents tested negative for the coronavirus and Busan officials said the boy seemed to have been in close contact with about 20 people on the plane.

Health officials said Sunday they would punish the teenager “as a warning to others,” but didn’t elaborate on the penalties the government had in mind. Authorities said anyone who lies to customs officials can face up to a year in prison or up to 10 million won ($8,000) in fines under the Infectious Disease Control and Prevention Act.

Starting yesterday, any Korean national or foreigner who violates the government’s two-week isolation rule can face similar penalties under the same act, which is more severe than the previous punishment when the maximum fine was 3 million won.

For foreigners particularly, health officials vowed to enforce the Immigration Act to deport them from Korea if they violate the self-quarantine order.

In Gunsan, North Jeolla, officials said three Vietnamese - two females and one male, all in their 20s - were caught roaming around a nearby park for about five hours after leaving their mobile phones at their self-isolation facilities.

All people arriving from overseas have to download a self-quarantine app on their smartphones that comes with a GPS function, which enables government officials to check whether they remain in their permitted boundaries. The Vietnamese were busted when a Gunsan official called to check in on them and they didn’t pick up their phones.

An official from the North Jeolla provincial office said the office has informed the Ministry of Justice about the violations and that the ministry will soon decide whether to expel them from the country.

In Gyeongsan, North Gyeongsang, a 60-year-old doctor who ran an internal medical clinic in the city died last Friday after contracting the disease from two of his patients who later came down with the coronavirus, marking the first death of a medical professional in Korea.