Indonesian deported for roaming around during quarantine

Indonesian deported for roaming around during quarantine 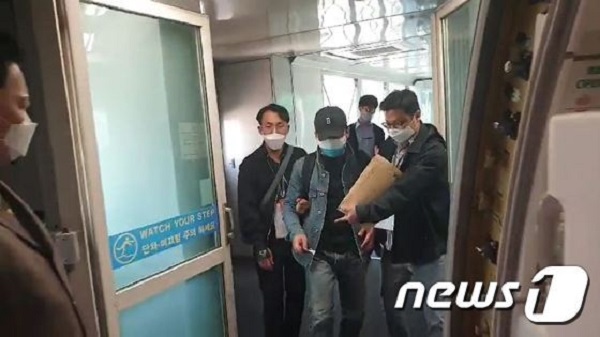 Officials from the Ministry of Justice escort an Indonesian man who violated the government’s self-quarantine order onto a plane to Indonesia Wednesday afternoon at Incheon International Airport after the ministry decided to deport him. [NEWS1]

New infections of the coronavirus dropped to 39 Wednesday, the lowest daily figure since cases began to soar in mid-February after a major cluster was traced to a church in Daegu.

As local health officials try to push the number down by imposing strict penalties on violators of self-quarantine orders, the Ministry of Justice announced that a 40-year-old Indonesian man was slapped with a 500,000 won ($411) fine and deported from Korea Wednesday afternoon after leaving his permitted area and lying to officials about it.

It was the first deportation of a foreigner for wandering around during self-quarantine.

From April 1, all Koreans and foreigners arriving in Korea from overseas have been forced to self-isolate either in their homes or government-run isolation facilities, except for a very few specific visa categories coming for short-term stays, such as diplomats and foreign government officials.

At least eight foreigners have been busted for roaming around, and the Justice Ministry said they were being considered for deportation as well.

As for the drop of infections, local health officials Thursday thanked members of the public for participating in the government’s so-called high-intensity social distancing campaign, saying the efforts were definitely helping.

Korea once had the second-most coronavirus cases in the world after China, but now it’s 17th on the list with 10,423 total cases.

By Wednesday midnight, 204 people had died, up by four from the previous day, while 6,973 people had been declared fully recovered, up by 197 from the day before.

The Seoul Metropolitan Government said Thursday that no new infections have occurred yet from a hostess bar in Gangnam District, southern Seoul, that was shut down April 2.

All hostess and karaoke bars and other nighttime entertainment establishments in Seoul have been forced to shut down until April 19 after a woman who tested positive for the coronavirus last week was found to have worked in the Gangnam hostess bar and had contact with at least 118 people.

Officials believe the 36-year-old female employee was infected by a relatively obscure male K-pop star who goes by the stage name Yoonhak. The 35-year-old, whose real name is Chung Yoon-hak, tested positive on April 1 shortly after returning from Japan.

So far, only the hostess’s 32-year-old roommate, who also works at the bar, has been infected.