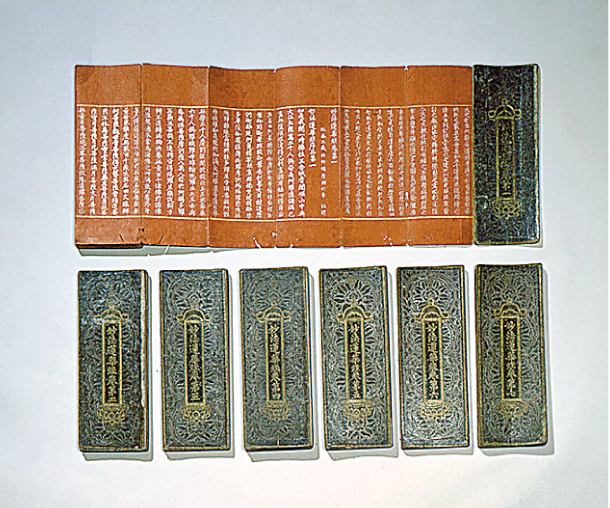 Saddharmapundarika Sutra, or the “Lotus Sutra” is the principal scripture of the Korean T’ien-t’ai sect. The main idea of the book is that the way to become a Buddha is being to open to everyone.

Along with the Avatamsaka Sutra, this principal scripture of the Avatamsaka Sutra is one of the books that had the greatest effect in the establishment of Korean Buddhist philosophy and most widely read since the of Three Kingdoms Period (57 B.C.-A.D. 668). This book was copied with extreme effort in the 22nd year of King Gongmin (1330-1374) of the Goryeo Dynasty (918-1392).

The characters are written in silver, and each book is made in the form of a folding screen.

According to remarks at the end, this book was published as an offering by a senior government official by the name of Heo Chil-cheong. The writings found in several places on the back cover suggest that this had been originally kept at Dogapsa Temple in Yeongam, South Jeolla.

Although it does not contain a summary painting, the book is made with utmost care and preserved in a relatively good condition. It was once taken to Japan but recently returned to Korea.

Photos and text are provided by the Cultural Heritage Administration. For more information, call (042) 481-4650 or visit www.cha.go.kr